JINCHEON, South Korea, Aug. 9 (Yonhap) -- For athletes, it's never easy being a child of a famous parent who accomplished great things in the same sport. Not everyone grows up to be Ken Griffey Jr. in Major League Baseball or Brett Hull in the National Hockey League. The pressure to live up to the family name can be daunting.

South Korean artistic gymnast Yeo Seo-jeong is dealing with such a burden at the tender age of 16. Her father, Yeo Hong-chul, won the 1996 Olympic silver medal in the men's vault. It remained South Korea's best individual performance in Olympic gymnastics until Yang Hak-seon won the men's vault title at the 2012 Olympics.

The senior Yeo also won back-to-back Asian Games gold medals in 1994 and 1998. Now 47 and a college professor, he will cheer on his teenage daughter to add another Asian Games title to the Yeo family -- in the women's vault, no less. 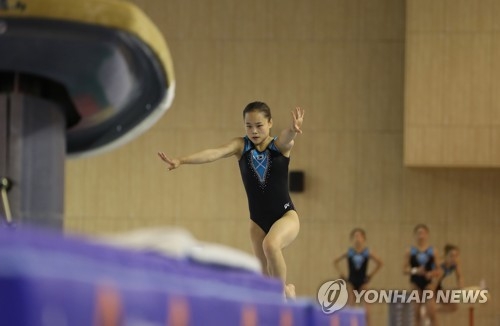 And for Seo-jeong, the Aug. 18-Sept. 2 Asian Games in Indonesia will be a chance to etch her name into the public consciousness.

"I don't want to be just called Yeo Hong-chul's daughter," she said during the national team media day at the Jincheon National Training Center in Jincheon, 90 kilometers south of Seoul. "I'd like be called by my own name."

The younger Yeo is in fine form heading into the Asian Games. Two months ago in Guimaraes, Portugal, Yeo won the vault title in the FIG World Challenge Cup event.

"I enjoy vault because of my dad's influence, and I enjoy the running part of it," she said. "Dad tells me to just keep doing what I've been doing all along. I used to feel all the pressure in the world but now I am just trying to enjoy the experience."

She said she was particularly inspired after watching clips of her father's performance.

"I'd love to win a medal in the vault, and I'll also try to reach the final in the floor exercise," Yeo added.

Yeo said she'll play it safe in Indonesia, opting for a more familiar technique rather than attempting a more difficult and risky move.

As the youngest female gymnast for South Korea, Yeo said she hopes to help her team reach the podium in the team all-around event -- which she believes will go a long way toward putting her kind on the map.

"The women's artistic gymnastics is not all that popular. When I tell people I am a gymnast, they immediately think of rhythmic gymnastics," Yeo said. "I can tell you we've all put in so much work for the Asian Games. We all want to show people that we can get the job done." 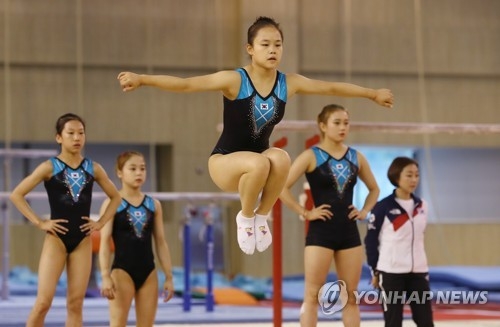