SEOUL, Aug. 9 (Yonhap) -- The South Korean government's YouTube clips on Dokdo, a pair of volcanic islets in the East Sea, have drawn more than 10 million hits, according to a related website Thursday.

The Ministry of Foreign Affairs posted the videos on a special website, dokdo.mofa.go.kr, in Korean, English, Japanese and nine other languages.

The Korean version, which lasts four minutes and 18 seconds, was made public at the end of 2013 designed to publicize South Korea's sovereignty over Dokdo claimed by Japan. It was followed by videos in the other languages. 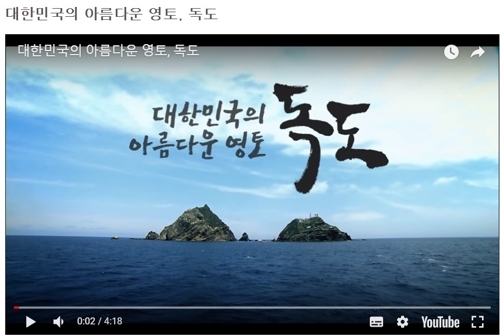 The video starts with a 1954 statement by then South Korean Foreign Minister Pyun Yung-tai that, "Dokdo was the first Korean territory to fall victim to the Japanese aggression."

It offers detailed explanations on why Dokdo is an integral part of Korea's territory historically, geographically and under international law.

It had recorded 8.2 million hits as of the day, with the English and Japanese clips being viewed 2.23 million and 230,000 times, respectively.

It's unusual for a government-produced video on a territorial issue to gain popularity, an apparent showing of Koreans' longstanding, keen interest in the Dokdo issue in the face of Japan's continued ownership assertions.