"Many South Koreans are unfamiliar with Sri Lankan Buddhism, with some expressing discomfort at the exotic outfit," Dhammakitti told Yonhap News Agency during an interview held amid the scorching summer heat in Seoul. He heads the Korea Sri Lanka Mahaviharaya, a Buddhist temple.

While South Korea is home to millions of Buddhists, the orange garments of Sri Lankan monks are still considered peculiar to some. Many monks here, although not always, tend to wear non-distinct gray outfits.

In Sri Lanka, monks normally expose a part of their shoulders, which is not the case in the Northeast Asian country.

For Dhammakitti, his top priority currently is to blend in with everyone around him and not look exotic, as his efforts to open up a new monastery for Sri Lankan expats faced hurdles due to residents expressing concerns over the presence of what they call a "new religion" for foreigners. 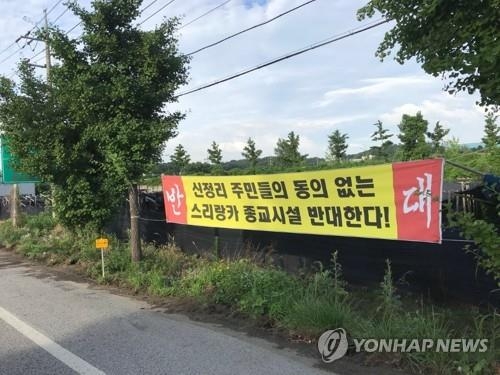 Lee Kuk-hwan, who represents the small town of Sinjeongri located in South Chungcheong Province, said he is worried about his peaceful town falling into instability following the construction of the temple.

"The monastery will bring foreigners here day and night, resulting in discord with residents. We are a small town with only around 50 households," Lee told Yonhap, claiming he does not wish to become a minority in his own hometown. "Crimes will likely increase."

Sri Lankan expats, including monks, factory workers, professors and students, are currently seeking to build a new temple in Sinjeongri, Asan, which can serve followers from nearby cities in South Chungcheong Province, as well as Daejeon.

The 650 million-won (US$577,000) project was funded mostly through loans and donations. Thousands of Sri Lankan expats chipped in to fund the project, along with around 1,000 South Koreans.

The Korean Statistical Information Service showed there were around 28,000 Sri Lankans staying in South Korea as of end-2016. Buddhism is the majority religion in the Asian country.

The project, however, is now stalled amid the conflict with the villagers.

Lee is not the only resident from the town who is opposed to the building of the monastery. 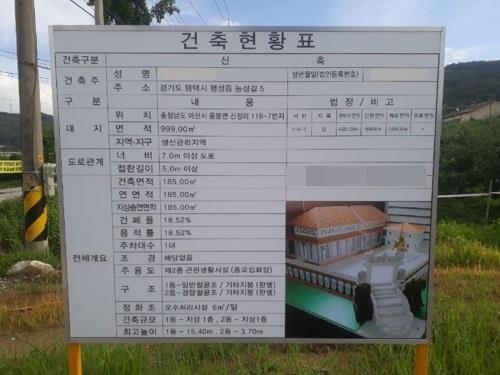 Some residents even did not hesitate to make racial remarks about the Sri Lankan temple, saying exotic religious activities will "taint" the village's reputation.

"Even in the ground-breaking ceremony, there was extreme noise and residents suffered from great inconvenience," claimed a petition from the town, which urged residents to join the protest.

"If the temple is completed, it will become extremely noisy every time it hosts ceremonies," the petition added. "As a lot of foreigners will wander around towns near the temple, we are becoming more concerned about safety."

"The temple's true intent is to hide illegal Sri Lankan immigrants in South Korea. For Sri Lankan people, the temple would be beneficial, but this is our country. I'm against the construction of the temple, especially if they are building it at the very entrance of our town," Lee said.

The Sri Lankan temple became even more controversial as South Korea recently saw public opinion split on how the country should cope with an influx of Yemeni refugees at the resort island of Jeju.

Some 500 asylum seekers from Yemen are on the island, which had previously allowed foreign nationals to visit the island without a visa for up to 90 days. A separate petition was also filed to the presidential office earlier calling for a ban on refugees in the country.

The petition gathered a record high of more than 700,000 participants, reflecting the rising antagonistic sentiment against refugees.

While the Sri Lankan temple case is different in nature, pundits said the Yemeni refugee crisis apparently sparked fear against foreigners, leading to collisions in other areas involving racial issues.

Sri Lankan monks and expats in the country said it is regrettable that residents are protesting against the construction just because more foreigners will visit their town. 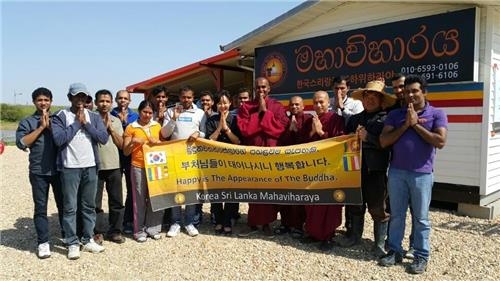 "There's no difference among the Sri Lankan temple and other Buddhists' congregations throughout the country," Gon Woon, a monk from South Korea's largest Jogye Order Buddhist sect, also told Yonhap. The monk has been working together with Sri Lankan residents in South Korea.

Buddhism is also one of the major religions in South Korea. The Korean Statistical Information Service showed around 15 percent of the population followed the religion as of 2015.

"I believe residents could protest if they had no understanding of what the temple is for. It is truly regrettable, however, that people are just against and unwilling to understand," Gon Woon added.

He pointed out that the construction was approved by the city government of Asan and holds no legal controversies.

The town head, however, has a different idea.

"The representatives of the planned temple should have communicated with residents during the process of purchasing the land. They never talked to us," Lee said.

"It is also suspicious that the land was purchased under the name of a South Korean," Lee added. "That is apparently a disguise to hide the true intention of the temple, such as hiding illegal immigrants."

The government of Asan, where the temple is located, said all procedures related to the construction were transparent.

"Currently, we are trying to persuade the residents, but they are reluctant to engage in any kind of talks," an official representing the city's construction affairs told Yonhap.

"I believe the residents are not familiar with Sri Lankan Buddhism, which resulted in many misunderstandings," the official added, claiming that the city government cannot involve much in the dispute.

"The construction holds no legal problems, and we cannot cancel the approval," another city official stressed, claiming residents seem to be more sensitive on the issue amid the on-going debate in the country on how it should embrace refugees.

Dhammakitti said he hopes the issue will be settled in the near future, as more people are being emotionally hurt by the prolonged deadlock.

"I don't mind being blamed at, as I am a monk. The heartache lies with other Sri Lankans, who are hurt from the antagonistic stances of some South Koreans. Being different does not make us criminals," Dhammakitti said.

"Hatred can be solved with generosity and tolerance. More hatred won't lead anywhere," he added, remembering when one elderly resident waved fists at him at the town.

Dhammakitti said the time is running out as the followers must find a new home by October and relocate from the one located in Pyeongtaek, south of Seoul.

"We never had discord with residents at our existing Pyeongtaek monastery. I believe that indicates that Sinjeongri people have nothing to worry about," the monk said.

"There are also South Korean Christian churches in Sri Lanka. Expats in South Korea are also making major contributions to the national economy. There are not only workers but also students and professors as well," he added, claiming the expats are not just aliens, but can be a bridge between the two countries.

Dhammakitti said a foreign community should not be alienated from the majority anywhere, as lack of interactions can lead to bigger problems in the future.

"If a foreign community is isolated, its members will only be able to communicate among themselves. This leads to the lack of knowledge, in this case, of the Korean culture," Dhammakitti said. "The community will be considered foreign even after generations. That is not desirable."

Despite being mono-ethnic for a great part of its history, around 2 million foreigners are estimated to be currently living in South Korea.

"We are people who follow the five precepts of Buddhism, which includes not harming life," Dhammakitti said. "We would never commit crimes and do anything that harms residents." 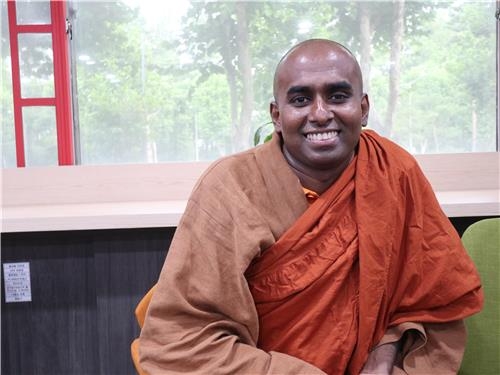