The latest reading marks the lowest since Moon took office in May 2017. It also marks the first time Moon's approval rating dipped below the 60 percent mark.

The local pollster partly attributed the drop to a renewed controversy over the possible involvement by one of Moon's confidants in an opinion rigging scandal.

Kim Kyoung-soo, a former ruling Democratic Party lawmaker and incumbent governor of South Gyeongsang Province, was summoned earlier this week for questioning over his prior knowledge of attempts led by a power blogger to manipulate online opinions in favor of the party. 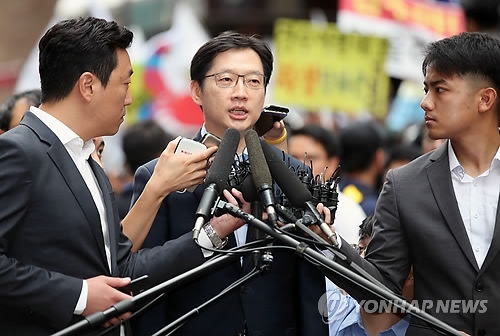 The pollster said disappointing government measures against the recent heat wave were also responsible for the sharp drop in Moon's approval rating.

The government decided to temporarily lower electricity rates for households following instructions from the president, which, according to many, came too late in early August, weeks after the entire nation struggled with record high temperatures.

An official from the presidential office Cheong Wa Dae said the government humbly acknowledges its shortcomings.

"The government understands the speed and direction of government policies regarding the heat wave and other issues may have failed to meet the people's expectations, and it humbly accepts the result of the latest survey," the official said, while speaking on condition of anonymity.

The ruling party too suffered a setback, with its own approval rating slipping 2.7 percentage points to 40.1 percent, according to Realmeter.

The main opposition Liberty Korea Party's rating gained 1.4 percentage points to 19.0 percent, while that of the progressive Justice Party came to 14.5 percent, marking a third consecutive week of increase.

The approval ratings of the minor opposition Bareunmirae Party and the Party for Democracy and Peace came to 5.3 percent and 2.2 percent, respectively.