Kim arrived at the special counsel's office in Gangnam, southern Seoul, at around 9:30 a.m. This is the second interrogation in a week following an overnight questioning he underwent on Monday.

Prosecutors called him in again, citing the need to continue the face-to-face investigation to speed up the probe that only has about two weeks to wrap up before its official 60-day term given by the parliament ends later this month.

The governor is suspected of involvement in the manipulation of Internet news comments led by an influential blogger, Kim Dong-won, who's better known by his nickname Druking.

Kim is alleged to have frequently communicated with Druking and his crew to carry out the scheme to rig the number of likes on news articles to benefit the ruling Democratic Party in late 2016, when the DP was the main opposition.

The governor reaffirmed that he has committed no wrongdoing.

"(I did consult with Druking) because it's natural for any politician to listen to diverse opinion from the public," he told reporters. "And I have never made a job offer to Druking's side."

Prosecutors also suspect Kim asked the Druking team to carry out a similar operation to sway public opinion in the DP's favor ahead of the June local elections and, in return, promised to give a lawyer friend of Druking, surnamed Doh, a post at an overseas diplomatic mission.

"I wish the truth to be revealed as soon as possible," he said. "And I also wish that investigations do not repeat being done out of context."

The streets near the special counsel's office were crowded with groups of people rallying for and against the governor. Police cordoned off the area where Kim would stand before the press to fend off any clashes.

The probe has become a hot button issue as Kim is known for his close ties with President Moon Jae-in. The case also potentially implicates Song In-bae and Baek Won-woo, two incumbent presidential officials who are suspected of involvement in the scheme. 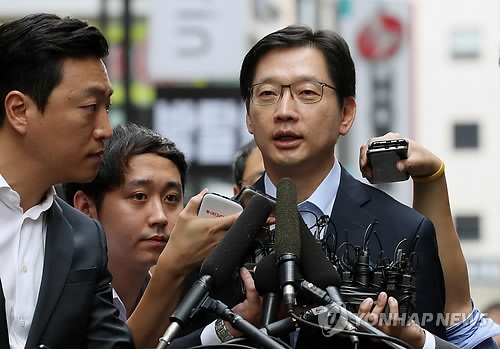