A total of 59 companies, including 14 banks, nine securities firms, eight credit card firms, 15 insurers and 10 state-run financial firms, will launch the exhibition at Dongdaemun Design Plaza in central Seoul for a two-day run starting Aug. 29, according to the Korea Federation of Banks (KFB).

During the event, job seekers will be able to pick one financial firm and have a chance to get consulting services regarding their employment prospects, the federation said, adding that more than one out of three applicants who take part in this job fair will enjoy benefits when they apply for job posts later this year.

The financial firms also plan to give a variety of counseling sessions meant to help participants successfully land a job, such as offering tips on how to carry out job interviews and makeup know-how, as well as providing general information on their business circumstances and market trends, the KFB added.

The banking sector has vowed to hire 3,100 workers in the second half of this year following their hiring of 1,500 employees in the first half. Other financial firms have also said they plan to announce new job openings this year. 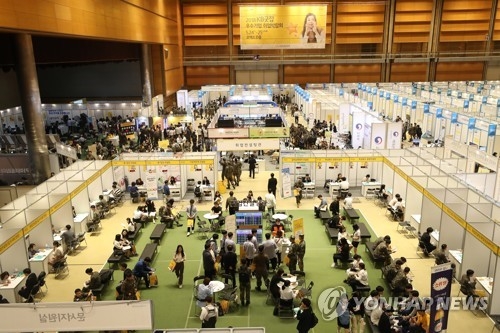