SACHEON/UIWANG, South Korea, Aug. 9 (Yonhap) -- Two BMW vehicles running on separate regional highways caught fire Thursday, adding to a string of similar cases that has prompted a government probe and an apology by the local unit of the German automaker.

One of the vehicles, a BMW 730Ld model, was gutted after a fire broke out in its engine area on Namhae Highway in Sacheon, South Gyeongsang Province, about 301 kilometers south of Seoul.

The 44-year-old driver said he had pulled over to switch seats with his friend and saw smoke coming out of the car exhaust pipe.

"I went over to check the engine and saw a spark," he said.

Firefighters called to the scene put out the fire in about 10 minutes.

The other BMW, a 320d model, was reported to have briefly caught fire at about 8:50 a.m. on a highway in Uiwang, Gyeonggi Province, just south of the capital. No one was hurt from the accident, but the fire completely destroyed the car, firefighters said.

The authorities said they are working to determine the exact cause of the accidents. 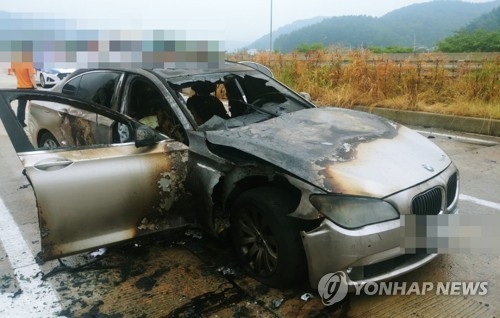