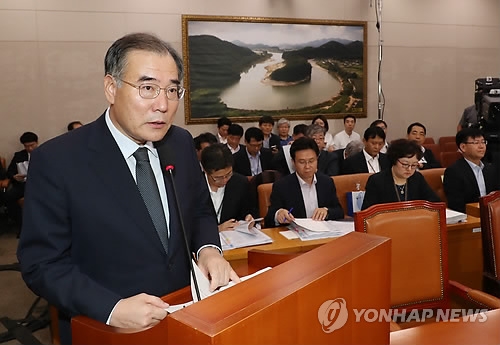 In regard to controversy over Lee's previous remark that dogs for meat and pets are different, the appointee said, "I personally don't eat dogs. I have great interest in animal welfare and think livestock breeders should properly take care of animals."

Lee also said he will take measures to stabilize rice prices when he takes office to secure stable levels of income for farmers.

"I don't agree that current rice prices are expensive," Lee said, noting that the prices should be over 194,000 won (US$173.30) per 80 kilograms, the government's current target price. "I will also seek ways to revise the rice subsidy system to better improve the welfare of farmers."

In South Korea, the government annually purchases homegrown rice to stabilize the domestic market grappling with oversupply and provides subsidies for rice farmers.

The chronic oversupply of rice comes as a growing number of South Koreans have been reducing their rice intake and diversifying their diets with alternatives like wheat, barley, beans and corn.

During the hearing, opposition lawmakers questioned Lee's ethical qualifications to be a Cabinet minister, raising allegations that his wife collected rent from an illegally built building in the southern city of Gwangju for decades, and that Lee omitted the building in his asset report when he was vice mayor of Gwangju.

Lee claimed that he listed the land on which the building is built in his asset report but failed to include the building because he was not aware of its existence. He promised to tear down the illegal structure and take steps to protect tenants.