SEOUL, Aug. 9 (Yonhap) -- An opposition lawmaker is seeking to allow the government to temporarily suspend the operation of vehicles with safety hazards, the lawmaker said Thursday, a move prompted by a recent series of fires in BMW cars.

Rep. Hong Chul-ho of the main opposition Liberty Korea Party said he plans to submit a revision to the law on vehicles in the near future.

The move comes one day after Transportation Minister Kim Hyun-mee said the government may consider suspending the operation of the specific model and year of BMW vehicles involved in the recent fires. As of Thursday, 36 cases of fire have been reported in BMW vehicles, mostly the 520d sedan.

Under the envisioned revision, the government will be given direct authority to suspend the operation of certain vehicles deemed to have defects that could jeopardize the safety of the driver or passengers, the lawmaker said.

Currently, such safety precautions can only come from local government heads, such as provincial governors, and affect only their respective districts, while the transportation minister may place such an order only in times of war or to prevent extreme traffic congestion in certain areas, according to Hong.

No casualties have been reported in the BMW fire cases, but some facilities, including private parking lots, are said to have begun banning BMW vehicles out of safety concerns. 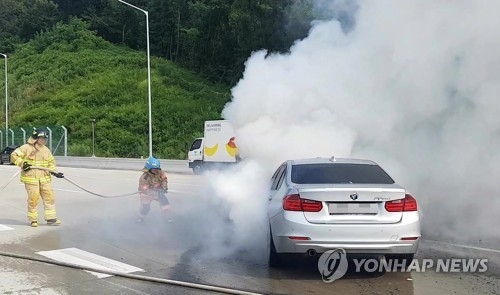