SEOUL, Aug. 9 (Yonhap) -- A female long-tailed goral, an almost extinct species of wild goat, has been found living on a mountain in Seoul following the first discovery of a male one last month in the South Korean capital, the environment ministry said Thursday.

The ministry has confirmed through a gene analysis of excretion obtained on Mount Yongma in Seoul's Jungnang Ward that an additional long-tailed goral inhabits the area around the mountain.

On July 22, a male of the species was spotted strolling around Yongma Falls Park on the mountain. It marked the first time the animal, which has been listed as extremely endangered in South Korea, had been found in Seoul.

It is likely that the two gorals, male and female, will continue to inhabit the mountain rather than move to other places, the ministry said, adding, "The discovery of the two gorals on Mount Yongma has strengthened the possibility of the mountain becoming a sustainable habitat for the animal."

Eight hundred to 900 individuals of the species, designated as the South Korean national monument No. 217, are known to live in South Korea. Major habitats for gorals include Mount Seorak on the country's east coast, the Demilitarized Zone separating the two Koreas and the southeastern town of Uljin.

Long-tailed gorals or Amur gorals are found in the mountains of eastern and northern Asia, including Russia, China and the Korean Peninsula. 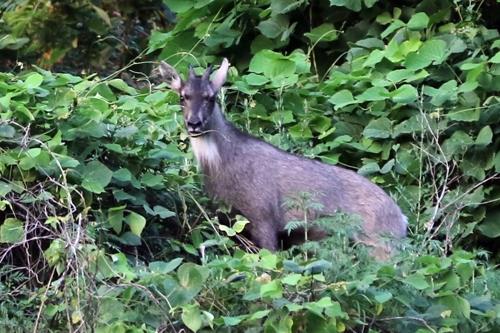