SEOUL, Aug. 9 (Yonhap) -- About 100,000 financial sector workers plan to stage an industrywide strike next month that would mark the first walkout in two years, an umbrella union for the workers said Thursday.

Some 93 percent of unionized workers voted this week to make known their displeasure over outstanding disagreements on the introduction of the shorter workweek system and other key labor issues, according to the Korea Financial Industry Union.

South Korea cut its maximum working hours to 40 hours, plus 12 hours of overtime, per week from 68 last month to reduce chronic overwork.

Despite the shorter workweek, the union said financial sector workers are "still caught in the mire of being overworked." 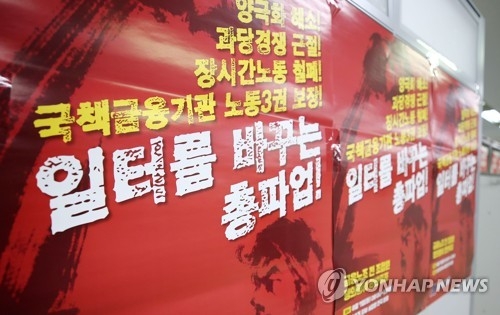 People working in various financial firms work an average 52.4 hours per week and a half of them work overtime at night every day, the union claimed.

The union also voiced its opposition against a move by the government to ease some regulations that ban nonfinancial firms from owning more than a 4 percent stake in a bank.

The regulations are aimed at preventing family-run business conglomerates, known here as chaebol, from exploiting a bank as their own vaults.

However, an expansion of Internet-only banks has been hampered by the regulations because major shareholders are unable to buy new shares in the banks.

Heo Kwon, head of the union, told reporters that the union would fight against the deregulatory move "by taking all means necessary."