SEOUL, Aug. 9 (Yonhap) -- It's a crime thriller again. Still, "The Negotiation," set to open next month, is drawing attention for being the first work between Hyunbin and Son Ye-jin, two of the Korean film industry's hottest actors, for a film from JK Film, the studio behind such box office hits as "Haeundae," "Ode to My Father" and "Confidential Assignment."

The new crime thriller tells the story of a police negotiator striving to save two Korean hostages after they were kidnapped in Bangkok by an arms dealer from an international crime ring.

"When I first received the script, I read it in one breath," Son said during a press conference for the upcoming movie at a Seoul theater on Thursday. "I was so curious about what will happen next in the story all the way through reading it. The script was overwhelmingly tense and immersive." 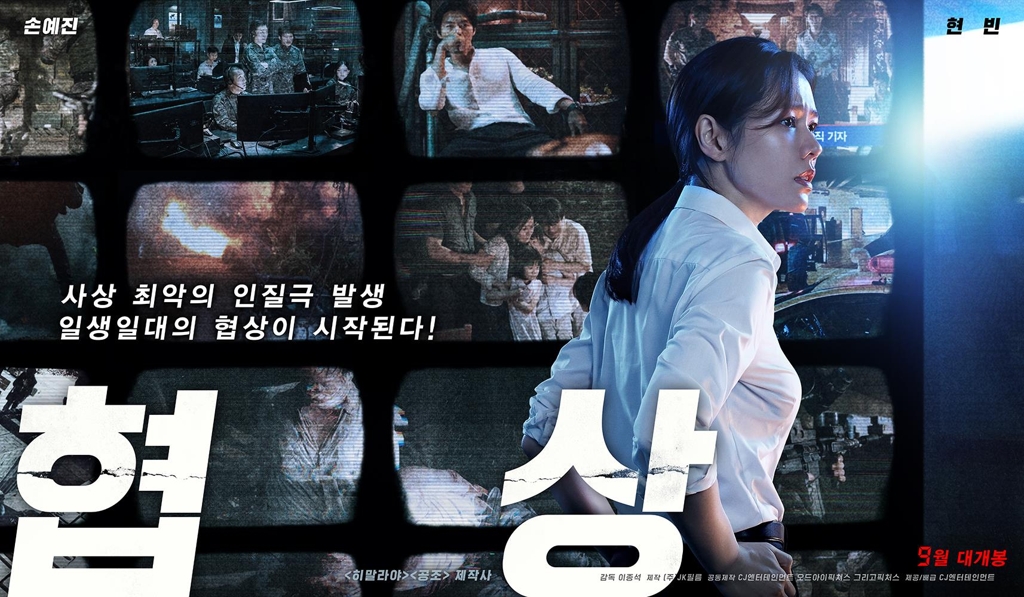 Hyunbin said he was interested by the movie's subject of negotiation, which has never been dealt with in Korean films. "I thought the one-on-one confrontation between the captor and the negotiator was fun, and that's why I chose to be part of the movie."

The 20th feature from JK Film will be the directorial debut of Lee Jong-seok, who was the assistant director of "Ode to My Father," a historical drama seen by 14.26 million people since it opened in local theaters in 2014. He later wrote the script for the mountaineering adventure film "The Himalayas," which also became a commercial success, drawing an audience of over 7.7 million.

Lee said he was very fortunate to work with the two top stars. "I wrote the script with the two in mind from the beginning. I thank them for choosing to appear in my film."

The most important element he thought about in making the film was how to elevate tension with limited spaces and time, the director said.

Since the hostage taker named Min Tae-gu (played by Hyunbin) and the negotiator Ha Chae-yoon (played by Son Ye-jin) each stay in Bangkok and Seoul, respectively, they can see each other only on screen monitors. And Ha is given only 12 hours to save the hostages.

What the director chose to overcome the time and space limit was so-called simultaneous dual filming, a method of shooting in two locations at the same time to allow actors to react to each other's acting on a real-time basis while looking into their monitors.

"At first, it was a bit awkward," Hyunbin said. "When I was acting face to face, I could hear and see the other actor's breathing and fine movements. It was strange that I had to hear my counterpart's voice only through an in-ear headphone and catch every movement and emotion only on a small monitor. But I think the shooting method was a good choice for the film."

It also was the first time for the actress with a career spanning nearly 20 years to shoot that way.

Son said the fact that she had to act sitting in the same police monitoring room while looking into the monitor all the time put huge pressure on her.

"This, as a result, had a good influence on us. I think we could not have reacted that lively to each other's acting if the scenes had been shot separately."