SEOUL, Aug. 9 (Yonhap) -- North Korea's media on Thursday emphasized the role and responsibility of ranking government and party officials in attaining the goals of its five-year strategy for national economic development.

The Rodong Sinmun, an organ of the ruling Workers' Party, said that officials at the cabinet and other economic guidance organs should embrace a revolutionary perspective and abandon all kinds of ideological ills to help implement the five-year economic growth plan.

"Economic guidance workers should not seek out the causes for things that do not work well from external factors. Instead, they should reflect on their standpoints on party policy and incinerate all kinds of ideological ills, such as defeatism, expediency and formalism," the paper said in its front-page editorial. 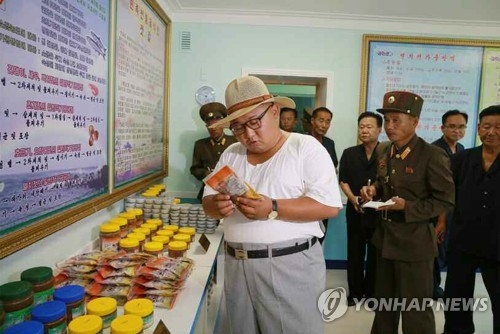 "The cabinet, as the nation's economic command, should decisively upgrade its economic guidance capabilities," it said, calling for a revolutionary perspective.

The paper's commentary came amid the Pyongyang regime's ongoing campaign to increase its economic output.

The paper made a similar argument in a separate article on the progress in the construction of a new large-scale hydroelectric power plant in South Hamkyong Province, while another editorial of the same newspaper stressed self-reliance in its economic development.

Cho Bong-hyun, an analyst at the IBK Economic Research Institute in Seoul, said that North Korea appears to be making efforts to find an internal breakthrough for its economy amid little signs of international sanctions being eased.

In July, North Korean media outlets carried extensive reports on Kim reproaching officials for their incompetence during his inspection of the construction site for the Orangchon hydroelectric dam and other economic development projects in the country's northeastern province of Hamkyong.

Kim leveled his criticism at ranking Workers' Party officials in charge of the economy and organization guidance, accusing them of engaging in "paper administration" without making in-person visits to the field.

In a separate on-site inspection of a chemical textile factory in Sinuiju in early July, Kim expressed deep concern about the cabinet's abilities to guide economic projects, as well as about the situation faced by the North's chemical industry.