SEOUL, Aug. 9 (Yonhap) -- Police on Thursday questioned two former officials of a local company that claimed to have discovered the wreck of a more than century-old Russian warship under water, as they dig deeper into allegations that it may be a scam by a fraudster family.

Choi Yong-seok, former chief of Shinil Group, and his predecessor Rhu Sang-mi are undergoing police questioning over their alleged involvement in the course of the discovery of the wreck of the Dmitrii Donskoi, a Russian warship that disappeared in 1905 during the Russo-Japanese War, officials said.

The shipping-to-construction firm released on July 15 submarine footage of what it claimed to be the wreck beneath the waters off Ulleung Island, east of the peninsula.

Rumors began to spread that the ship had gone down with 200 tons of gold, worth 130 trillion won (US$116 billion), leading the local stock market to fluctuate.

Speculation spread quickly that Shinil may be running a scam. It had a second press conference in which it adjusted the value estimate of the treasure to 10 trillion won. In the document it submitted to the maritime ministry for excavation approval, the estimated value was 1.2 billion won.

The company has shut down all operations, including its official website.

Police believe Choi played a key role in the company business as a partner of the Rhu siblings -- Rhu Sang-mi and Rhu Seung-jin -- who headed the firm's Singapore unit.

Choi stepped down as CEO early this month amid the scandal. Rhu Seung-jin fled to Vietnam after he was implicated in a separate fraud case in 2014 and remains at large. Police have recently requested that Interpol list him on its Red Notices over the Donskoi case.

The Seoul Metropolitan Police Agency probing the case now suspects the case may be a scam led by the Rhu family.

Its Singapore-based affiliate at the time allegedly tried to sell investors cryptocurrency issued based on the potential value of the shipwreck.

The firm attracted investors by saying the currency's value will be jacked up to 10,000 won by the end of September this year from the current 200 won.

Police tried to question another ex-Shinil official, only identified by his surname Yoo, last month at a detention center in Incheon, west of Seoul, but he refused to talk to them without his lawyer. Yoo is being held for a charge unrelated to this case. 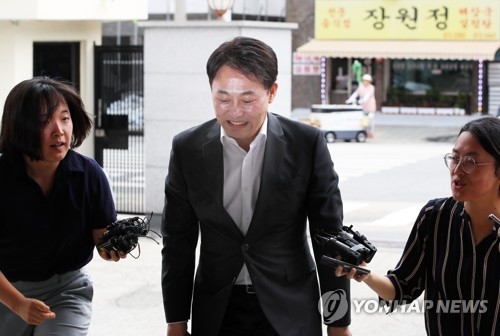