She has now set her sight on shooting a round of 58, which would be the lowest single-round score in LPGA history.

"My initial goal was to reach the Hall of Fame, but I'm also enjoying setting these records," Kim told reporters in Seoul on Thursday. She arrived home earlier this week for a short break following the Ricoh Women's British Open.

Kim won the Thornberry Creek LPGA Classic in July with a 31-under 257. She set records for both the lowest score in relation to par and the lowest aggregate score over 72 holes.

Kim, a seven-time LPGA winner and world No. 19, shared the previous scoring record with Annika Sorenstam at 27-under, and now Kim wants to break another of Sorenstam's scoring marks.

The retired Swedish legend shot 59 in the second round of the Standard Register PING in 2001. She remains the only LPGA player ever to break 60 in a round. On the PGA Tour, Jim Furyk holds the record with 58 at the Travelers Championship in 2016.

"I was thinking about some special records that other players have set, and I decided I'd like to shoot 58," Kim said, adding that she isn't interested in playing against men on the PGA Tour like Sorenstam and Brittany Lincicome have done. 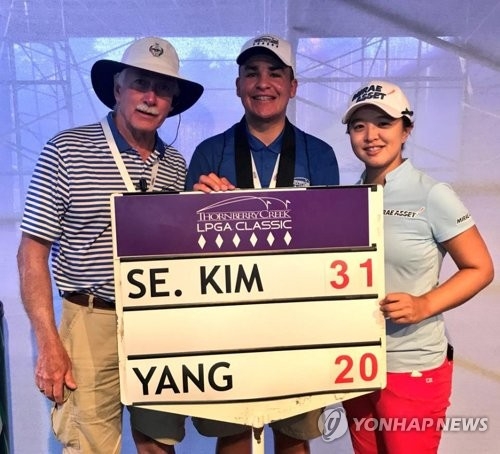 Looking back on her record-breaking performance a month ago, Kim said the greens were soft and receptive, and she putted very well.

"I was able to reach all four par-5 holes in two shots, and that really worked to my advantage," Kim said. "If I kept thinking about the records, I wouldn't have played so well. So even on the last hole, I told myself I was playing on the first hole."

Kim said she would like to win her first major at the Evian Championship in France next month, and also lift the champion's trophy on home soil when the LPGA Tour comes to South Korea for the KEB Hana Bank Championship in October.

Kim will return to the United States on Monday and resume her season at the Canadian Pacific Women's Open starting on Aug. 23.