Lee Si-young and Kim Jin-ya are listed as wing backs on the 20-member South Korean national football team that will compete at the Jakarta-Palembang Asian Games.

South Korea are looking to defend their Asian Games title. They are set to play Bahrain, Malaysia and Kyrgyzstan in Group E.

South Korean head coach Kim Hak-bum said his side will mainly use a 3-5-2 formation during the Asian Games. Kim is set to cover the left flank, while Lee will play as a right wing back. 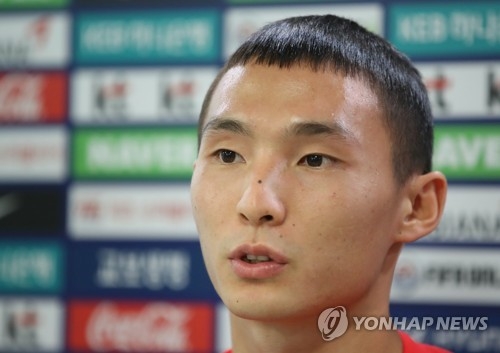 "I know that wing backs play important role in the back three system," Lee said to reporters at the National Training Center in Paju, north of Seoul. "We'll first make a lot of runs, and if our opponents sit back, we'll try to penetrate open space and create chances for attackers."

Lee, plays for second division side Seongnam FC, said mobility is the key. The 21-year-old said he is determined to show his strengths on the pitch.

"I know I haven’t played many games with my club, but I'm ready to show what I can do," he said. "People say we have very good players on this team, but the Asian Games is an event with many variables, so we have to be thoroughly prepared."

Unlike Lee, Kim is regularly playing with his club. The 20-year-old has featured in 15 matches so far this season with Incheon United in the K League 1.

"I usually play as a full back on my club, but I'm learning many things from the head coach," Kim said. "If I can improve my defense, I'll have a good game."

Kim said efficiency will be the key for South Korea. He believes using his stamina at the right moment will help the team.

"We first have to be physically ready," he said. "We have to avoid unnecessary moves on the pitch." 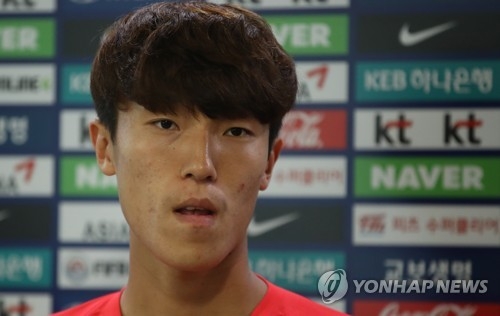 South Korean wing backs will have to work closely with star attackers in the front line, such as Tottenham Hotspur's Son Heung-min. Kim said it will be an honor to play with Son, but he'll not forget what his job is.

"It's just a big honor to play with a world-class player like Son, but on the pitch, he is also my teammate," he said. "I'll first have to get to know Son well and then build up combination plays."

The U-23 national team will depart for Indonesia on Sunday to prepare for their opening match against Bahrain next Wednesday.