Jeong, who stands at 194 centimeters, is the tallest field player on the South Korean men's football squad for the Jakarta-Palembang Asian Games in Indonesia. The Jeju United defender currently has one goal in three matches for the under-23 side.

"I know I'm tall in Asia," Jeong said to reporters ahead of training at the National Football Center (NFC) in Paju, north of Seoul. "I'm really looking to score a set piece goal at the tournament."

South Korea will use a back three system at the Asian Games. Jeong said defenders are working hard to understand head coach Kim Hak-bum's tactics and build teamwork.

"We have been training together for more than a week, and it's shaping up," he said. "We're especially paying attention to control the distance between players."

Jeong, 21, said he is learning many things from experienced teammates like Kim Min-jae, who is a core member of South Korean pro football champions Jeonbuk Hyundai Motors. Jeong made his pro debut this season but has played only four matches so far.

"We have defenders like Kim Min-jae who have been showing good performances with their clubs, and I'm learning many things just by watching them," he said. "Maybe this is the reason why the coach has decided not to use a wild card on defense."

The men's football tournament at the Asian Games is open to players aged 23 or under, but teams can use three overage, or wild card, players. For the Jakarta-Palembang Asian Games, South Korea have selected Tottenham Hotspur attacker Son Heung-min, Gamba Osaka striker Hwang Ui-jo and Daegu FC goalkeeper Jo Hyeon-woo as their wild card members. 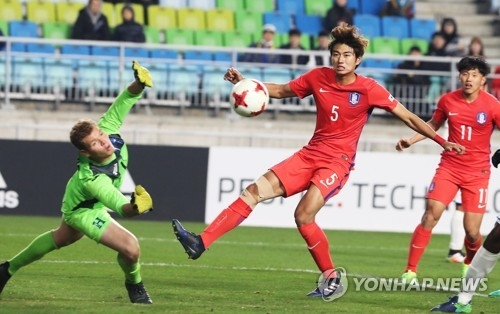