The new record, "Summer Ade," which is DIA's fourth extended play since their debut in 2015, is led by the main track "Woo Woo," an exclamation of the thrill of love.

Composed by star K-pop producer Shinsadong Tiger, the main track is a Miami bass tune with an addictive refrain that features a "sexy and cute" dance move in the shape of a kitten's paw, according to the DIA members. It was DIA's second collaboration with Shinsadong Tiger, who produced the girls' debut single "Somehow." 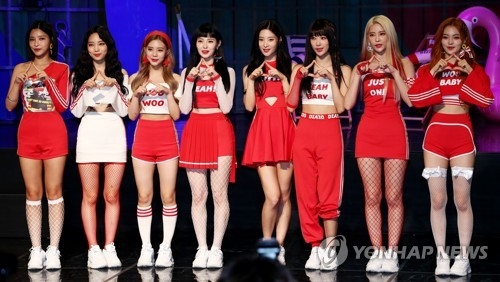 The new release brought DIA back from its unusually long 11-month hiatus and came after the band delayed its initial plan to release a new extended play early July.

While they were away, member Eunjin left the group, once again reshaping DIA, this time into an eight-piece act.

"As we prepared for a new album, we initially had our songs and choreography ready (but canceled the initial plan for comeback) because we asked Shinsadong Tiger to make the most (of the new album)," member Huihyeon said in a media showcase at Blue Square concert hall in central Seoul.

"Our members even banded together to go visit Shinsadong Tiger to prod him. That is how our new song 'Woo Woo' came into being," she noted, recalling the group members' desperation for a quick return to the K-pop scene.

The members couldn't hide their anxiety with the new release as they joined this summer's exceptionally competitive K-pop scene for girl groups. Top-charting rival girl bands -- TWICE, BLACKPINK, Mamamoo and Red Velvet -- are currently competing for the summer record market.

"We cannot help aiming high in terms of charting. Currently, there are so many prominent (girl bands) filling the charts, but we want ours to be successful as well," according to Huihyeon .

"We told ourselves that this time we should do our best to the extent that we would have no regrets remaining even if this becomes our last chance," member Eunice said.

The new album is a compilation of seven tracks, including the lead song and three other tracks, each composed and written by three of the eight members, a feat they attributed to their long retreat from the scene.

The fifth track, "Take Me," is written and partly composed by Jueun while Yebin and Huihyeon contributed to the creation of the sixth and seventh tracks -- "Sweet Dream" and "Blue Day."

"Writing my own song has been my goal and it was finally possible for me to write the track 'Take Me' because I had a plenty of time and energy (during the hiatus)," Jueun said. "It carries a cute complaint (of a girl) who asks (her lover) to come and take her because it's raining even if, in fact, it's not rainy."

As the girl band joined the crowded summer record market rather belatedly, they doubled efforts to wrap their performance in a fresh, more mature light.

"If I would put the key point of our change and maturity this time into one word, it would be sexy-cuteness," member Eunchae noted. 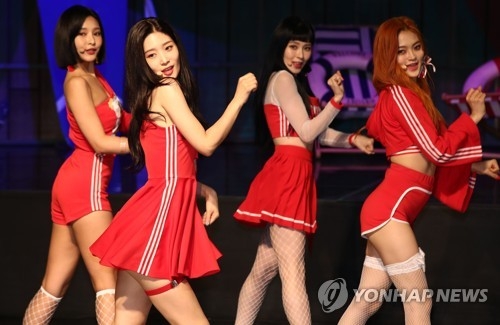 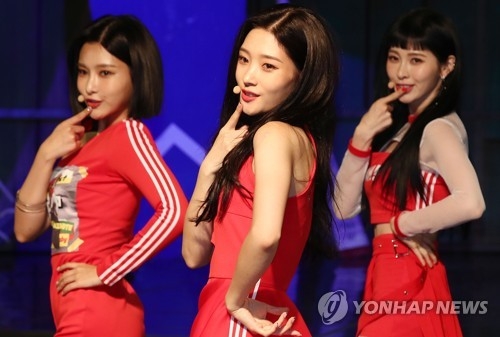