JEJU, South Korea, Aug. 9 (Yonhap) -- "Drive for show, putt for dough," a well-worn cliche in golf emphasizing the importance of putting despite the thrill of long tee shots, is ringing quite true for LPGA Hall of Famer Park In-bee, who says she has never needed her putter more.

Park is back in her home country to play at the Jeju Samdasoo Masters on the Korea LPGA (KLPGA) Tour beginning Friday at Ora Country Club on the southern resort island of Jeju. But the world No. 3 is limping into the tournament, having missed cuts at back-to-back majors, the KPGA Women's PGA Championship and Ricoh Women's British Open. She has fallen out of the No. 1 ranking in the process.

Park attributed her recent struggles to her lack of distance off the tee. 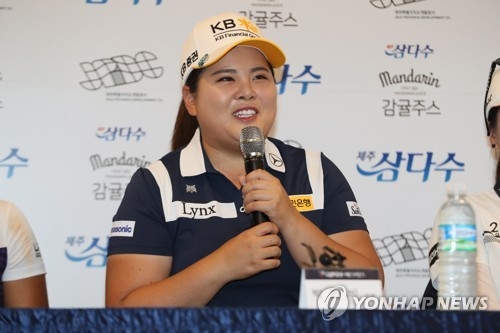 "Earlier in the year, when we were playing on hard fairways on the U.S. west coast, I didn't think I was hitting it short," Park said Thursday at a pre-tournament press conference on Thursday. "But on courses where fairways got soft with rain, I realized how much I was lacking in distance. I've never felt that way during my 12 years on the tour. Other players are hitting it farther, and courses have become longer, too."

Park said she has been hitting long irons or hybrids into par-4 greens, when longer hitters were firing short irons, and she's not been able to set up as many birdie opportunities as she'd like.

Park has never been a long hitter. This year, she is 130th in the LPGA with an average of 247.81 yards off the tee. Eight players are sending their drives over 270 yards on average.

Park has built her Hall of Fame career with a short stick. In 2018, she is No. 2 in putts per greens in regulation at 1.746, and No. 10 in putting average with 29.13 putts per round. Park has been consistently among the leaders in those categories.

The 30-year-old said she will have to keep wielding a hot putter to be in contention on the tour.

"I don't think trying to increase distance at this point in my career is the answer," she said. "Ultimately, I have to be sharper with my putting and short game."

Park has only played in 11 out of 22 LPGA events this year. Prior to the season, Park said her goal was to stay healthy for the entire year and that she would willingly reduce her playing schedule if necessary.

She rejected the notion that the abbreviated schedule has affected her play.

"I've scaled back so I could avoid injuries, and I am in great physical condition as expected," she said. "I don't think it was a wrong decision to cut down on the schedule." 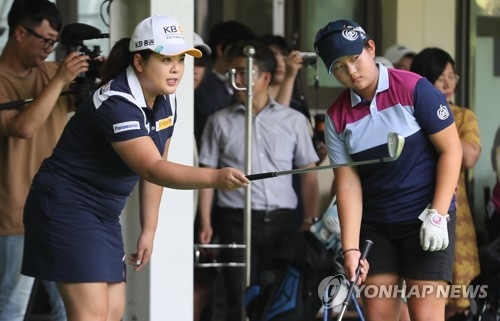 Park also shrugged off losing her No. 1 ranking.

"I was at No. 1 at the start of the season, and I never even expected to be No. 1. It came as a gift," she said. "I never once thought I'd be at the top forever. I fell from the top ranking twice before, and for me, it's just a place where I get to stay temporarily."

Park stirred some controversy last month when she abruptly pulled out of the 2018 UL international Crown, an LPGA team match play competition to be held in South Korea in October. Park only said at the time that she wanted to give another South Korean player a chance to compete, and she didn't reveal much when pressed further Thursday.

She did add that the venue for the competition, the Jack Nicklaus Golf Club Korea in Incheon, 40 kilometers west of Seoul, is better for players who hit fades and that it doesn't suit her ball flight.