PAJU, South Korea, Aug. 9 (Yonhap) -- As difficult as it may end up being, two South Korean women's football defenders said Thursday that they are looking to beat Japan at the upcoming Asian Games.

Kim Hye-ri and Jang Seul-gi are two of the seven defenders on the South Korean women's national football team that will compete in the Jakarta-Palembang Asian Games in Indonesia. Both players said they want to notch a victory over Japan if the two teams meet. Japan are the top Asian team in FIFA women's rankings.

South Korea have just four wins against 10 draws and 15 losses versus Japan. The two sides played to a scoreless draw in their latest meeting at the Asian Football Confederation (AFC) Women's Asian Cup in April. South Korea's last win over Japan came in 2015.

"We had good chances at the Asian Cup, but couldn't score," Kim said to reporters at the National Football Center (NFC) in Paju, north of Seoul, ahead of training. "But this time, we have good quality attackers on our team. If I help this team not surrender goals, I think we can get a positive result." 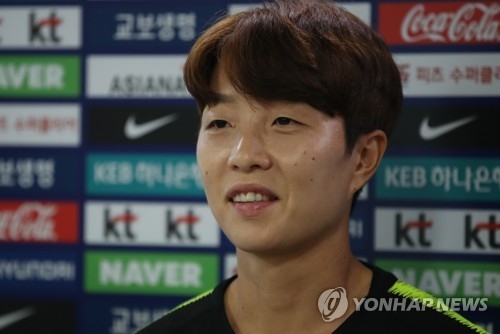 The women's football tournament at this year's Asian Games features 11 teams. South Korea are in Group A with Indonesia, Taiwan and Maldives. North Korea, the defending champions, are in Group B with China, Hong Kong and Tajikistan. Group C only has three countries: Japan, Vietnam and Thailand.

The top three nations from Groups A and B, and the top two from Group C, will advance to the quarterfinals. Under the tournament bracket, South Korea may face Japan in the semifinals.

"The semifinal match could be the most difficult one," she said. "But the players will work together to win a gold medal."

Kim is a veteran of two previous Asian Games, where South Korea claimed bronze medals. The 28-year-old is also the fourth-most capped player on the team after playing 73 matches.

Kim said she has a personal reason to win a gold medal at the Jakarta-Palembang Asian Games.

"This could be my last Asian Games, so I'm preparing for the tournament with strong desire," she said. "I experienced third place at the 2010 U-20 World Cup and won two bronze medals at the Asian Games. This Asian Games is a good opportunity for me to collect a result better than third place." 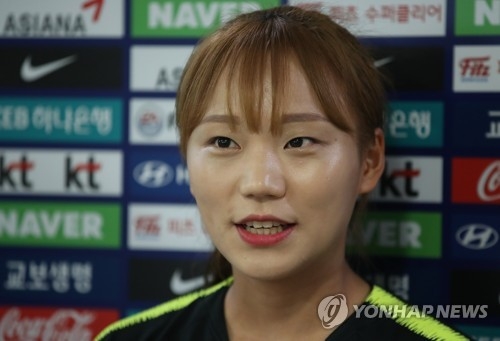 Jang will make her Asian Games debut in Indonesia. The 24-year-old said she is thoroughly preparing for her first Asiad.

"I heard from many players that the preparation for the Asian Games is difficult compared with other competitions," Jang said. "You also have weather issues, but everyone is working hard."

Jang, who plays with domestic club Incheon Hyundai Steel, also said she wants a victory over Japan. She played with Japanese club INAC Kobe from 2013 to 2015.

"I know I didn't perform well when I was in Japan and that's why I want to play really well (against Japan) this time," she said.

Jang has scored nine goals in 42 caps, the most goals among South Korean defenders selected for the Asian Games. She began her career as a forward, but has been mainly playing at wing back positions recent years.

"I also play both attacking and defense roles on my club," she said. "I'll play with confidence, like I do with my club."