SEOUL, Aug. 9 (Yonhap) -- Summertime sea surface temperatures in South Korea rose by almost 3 C from 2010 to 2018, a possible indication that massive heat waves gripping the country this year could worsen in years to come, according to a survey released Thursday by the state weather agency.

The survey, conducted by the Korea Meteorological Administration, showed that sea surface temperatures off the Korean Peninsula recorded by 17 meteorological measurement buoys increased by an average of 0.34 C a year in the month of July over the reported period.

The 0.34 C growth represents a 2.4-fold increase from the average 0.14 C rise in sea surface temperatures that took place from 1997, when related data began to be compiled, to this year.

A study conducted by the U.S. National Oceanic and Atmospheric Administration (NOAA) has revealed a similar result. The analysis of July sea temperatures off the peninsula from 2016 to 2018 revealed that the high sea temperature area with a temperature of 25 C or higher continued to expand northward.

An imagery line of the same sea surface temperatures appeared in waters off Taean on the country's west coast and off the southeastern city of Ulsan in July 2016.

The weather agency attributed the rise to this year's record-high temperatures amid sweltering heat, which has gripped most parts of the country, and less impact in recent years of typhoons on the peninsula that can mix cold water below the sea surface and warm water on the surface.

Other factors that caused the sea surface temperatures to rise included the strengthening of the warm Kuroshio Current, which begins off the Philippines and flows northeastward past Japan, and the warm Tsushima Current.

The fundamental cause behind the rise was the impacts of climate change that include melting glaciers and rising sea levels.

The administration proposed that planners for the establishment of coastal cities come up with measures to take care of increasing erosion of beaches resulting from rising sea levels.

It also warned that the country could be hit by heat waves in the coming years given the rise in sea surface temperatures. 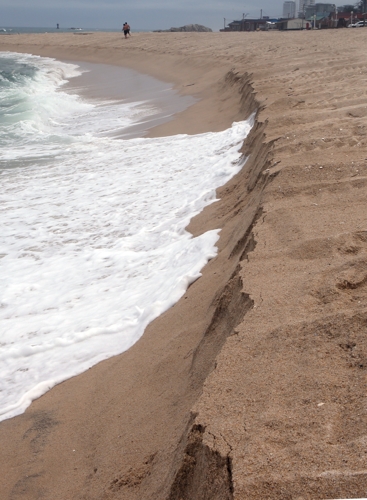