SEOUL, Aug. 10 (Yonhap) -- The state pension operator is considering extending the subscription period by about five years to narrow the gap years before payouts and to improve the fund's finances, multiple sources said Friday.

The government is scheduled to announce the results of its latest review and long-term sustainable operation of the pension plan at a public hearing Aug. 17.

According to the sources at the Ministry of Health and Welfare, the National Pension Service and the parliamentary committee on welfare, the proposal would include extending the subscription period to age 65 from the current 60.

The payout year, initially set at 60, was pushed back in phases in a revision enacted in 2013 for a one-year delay every five years. For instance, people who were born in 1952 or before would receive their pension at the age of 60, but those born in 1969 or after would get their pension from the age of 65.

For the latter group, subscribers would have to wait five years before receiving pension money, a gap, referred to as the crevasse, which is too long for the large population of retirees who have no income during the period. 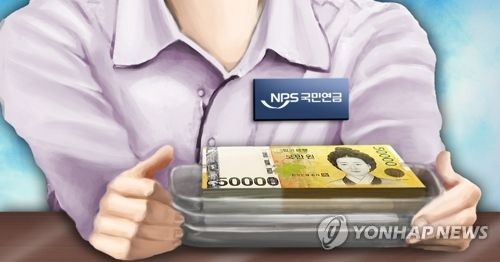 Backing the argument for a longer subscription period is the improvement of the pension fund's financial soundness. According to the latest review, the pension service could run out of money by 2056 or 2057 if its current system is maintained, three to four years faster than previously assessed.

Recommendations for longer subscriptions have been made since 2015. That year Woo Hae-bong, a researcher with the Korea Institute for Health and Social Affairs, recommended adding five more years to help raise the sum of payouts. A similar argument was put forth by the Public Pension for All civic group in September of the same year.

Lee Yong-ha, the head of the National Pension Research Institute that oversaw the recent review, made similar proposals back in September 2016.

Such calls also fall in line with the reality of youths finding jobs much later in life than before, advocates of the subscription extension say. Such youths should be able to subscribe for longer to receive a better payout later, they say.

The new proposal, however, would have to take into account private subscribers who do not have employers to share the monthly payments, sources said. One option would be to extend the subscription for the working population first, they said.
(END)