SEOUL, Aug. 10 (Yonhap) -- A North Korean delegation is set to arrive in Seoul on Friday to take part in a planned inter-Korean workers' football match on the weekend, organizers said.

The 64-member delegation, led by Ju Yong-gil, head of the General Federation of Trade Unions of Korea, will cross the western land border at about 10 a.m. on a three-day visit to the South, the organizers said.

They will be escorted in a vehicle to Walker Hill Hotel in eastern Seoul, before holding a joint press conference with South Korean counterparts from two major umbrella labor groups -- the Korean Confederation of Trade Unions (KCTU) and the Federation of Korean Trade Unions (FKTU).

The representatives from the two Koreas will then join a welcoming banquet later in the evening, at which Seoul Mayor Park Won-soon will deliver a congratulatory speech.

The football match is due to kick off at Seoul's Sangam World Cup Stadium at 4 p.m. on Saturday, with about 30,000 citizens and laborers from both the South and the North to be present.

On Sunday, the North Korean delegates will visit the tomb of Jeon Tae-il, a South Korean garment worker who burned himself to death in protest for better pay and working conditions in 1970, in Maseok, Gyeonggi Province. 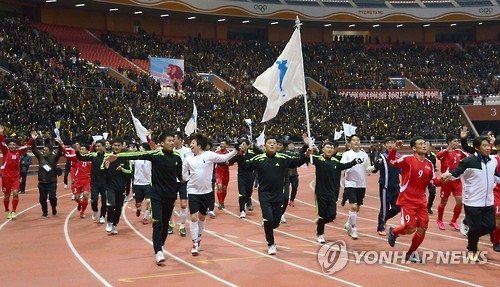