PAJU/SEOUL, Aug. 10 (Yonhap) -- A North Korean delegation crossed the border into South Korea on Friday to take part in a planned inter-Korean workers' football match on the weekend, organizers said.

The 64-member delegation, led by Ju Yong-gil, head of the General Federation of Trade Unions of Korea, arrived at the Customs, Immigration and Quarantine (CIQ) office in Paju, just south of the inter-Korean border, at about 10:25 a.m., the organizers said.

Waving the unified Korean flag, the delegation was split into two groups to be escorted in chartered buses to Walker Hill Hotel in eastern Seoul.

They will hold a joint press conference there with the KCTU and FKTU counterparts as the first official itinerary of their three-day visit.

The representatives from the two Koreas will then join a welcoming banquet later in the evening, at which Seoul Mayor Park Won-soon will deliver a congratulatory speech.

The football match is due to kick off at Seoul's Sangam World Cup Stadium at 4 p.m. on Saturday, with about 30,000 citizens and laborers from both the South and the North to be present.

On Sunday, the North Korean delegates will visit the tomb of Jeon Tae-il, a South Korean garment worker who burned himself to death in protest for better pay and working conditions in 1970, in Maseok, Gyeonggi Province. 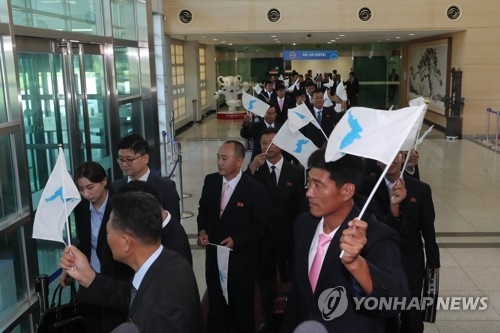