SEOUL, Aug. 10 (Yonhap) -- South Korean reliever Oh Seung-hwan has given up his first home run as a Colorado Rockie, while having his scoreless appearance streak snapped at 15 games.

Oh squandered a 5-3 lead over the Los Angeles Dodgers in the top of the eighth inning at Coors Field in Denver on Thursday (local time), when he served up a two-out, two-run blast to Cody Bellinger. The Rockies lost the game 8-5, as the Dodgers put up three more runs in the top of the ninth against the helpless bullpen.

Oh saw his ERA rise from 2.33 to 2.63 after getting charged with two earned runs in 2/3 of an inning. He hadn't allowed an earned run in his past 15 outings, including his first seven games with the Rockies since arriving in a trade from the Toronto Blue Jays in late July. 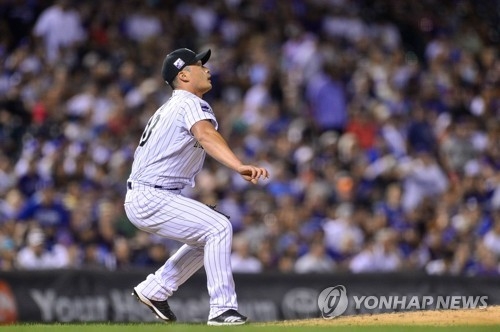 But Matt Kemp hit a ground-rule double to left-center field to keep the inning alive for the Dodgers. And then Bellinger jumped on a first pitch fastball and drove it over the center field wall to tie the game at 5-5.

Catcher Chris Iannetta was setting up on the outside, but Oh missed his spot with his 91.1 mph four-seamer that caught the inner part of the plate.

Oh hadn't given up a long ball since June 23 against the Los Angeles Angels.

Oh walked the next batter, Joc Pederson, and manager Bud Black had seen enough, as he summoned Wade Davis to take over.

Davis himself gave up two home runs in the top of the ninth as the bullpen woes continued for the Rockies. They have the National League's worst bullpen ERA at 5.22.

The Rockies acquired Oh in part to address that bullpen issue, and the right-hander had been a picture of steadiness until this game.