Foreigners picked up a net 373.4 billion won (US$332.2 million) worth of local stocks listed on the top-tier market during the one-month period, according to the data from the Korea Exchange (KRX).

It is the first time that they bought more shares than they sold since January, when they scooped up 1.98 trillion won worth of KOSPI shares.

"Their turnaround came as the strengthening of U.S. dollars was abating," said Yoon Young-kyo, an expert at Cape Investment & Securities.

In July, the most favored item among foreign investors was SK hynix, a major chipmaker, as they bought a net 320.7 billion won worth of the shares, followed by top portal operator Naver, LG Innotek, Samsung Electro-Mechanics and Woori Bank, according to the latest data.

On the other hand, they disposed of such shares as top cap Samsung Electronics and LG Electronics, whose second-quarter performances did not meet expectations.

On the overall stock market, foreigners purchased US$120 million worth of South Korean shares in July, a turnaround for the first time in four months, according to the Bank of Korea.

It is not certain, however, whether the foreign investors' buying mode will continue so as to add upward momentum to the bearish KOSPI market.

"They are quite sensitive to developments related to global trade disputes as South Korea is heavily dependent on exports. So it will take some time to expect foreigners' serious comeback to the local market," said Kim Young-hwan of KB Securities. 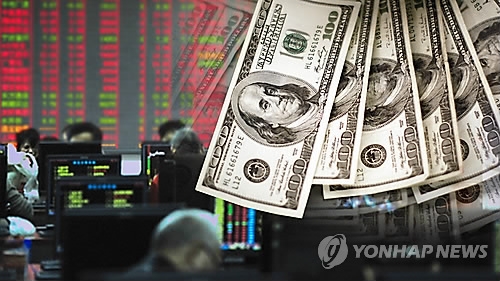 Foreigners turn to net buyers of KOSPI shares in July

Foreigners turn to net buyers of KOSPI shares in July