The cross-border trip by a delegation of 168, including athletes, journalists and government officials, is believed to be the first one by South Koreans using a land route since December 2011, when former first lady Lee Hee-ho and Hyundai Group Chairwoman Hyun Jung-eun visited the North to pay their condolences after then North Korean leader Kim Jong-il's passing.

The tournament, jointly organized by Seoul's South-North Korea Inter-Korean Sports Association and Pyongyang's April 25 Sports Club, will run from next Monday to Aug. 18. It will also feature teams from Russia, Belarus, Uzbekistan and China. The South and the North will each field two teams.

Known as the Ari Sports Cup, the U-15 event was first held in South Korea's border town of Yeoncheon in 2014. This year's event is the fourth edition.

Choi Moon-soon, governor of Gangwon Province serving as the leader of a team from his province, told reporters, "It is a significant development that South Koreans and North Koreans can travel across the border by land without going through a third country." 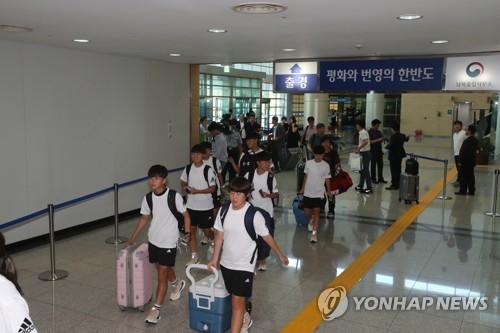