Foreigners and institutions offloaded a net 180 billion won and 87.1 billion won worth of shares on the main exchange, respectively, while individual investors scooped up a net 149.2 billion won.

"It is highly possible that the local stock market will slow down in the face of a strong U.S. dollar and the overall slump of the U.S. semiconductor sector," said Hong Choon-wook, an analyst at Kiwoom Securities.

Most large-cap shares ended lower, with the tech stocks pulling down the KOSPI.

Shares of biopharmaceutical companies ended mixed, with Samsung BioLogics, a biopharmaceutical affiliate of Samsung Group, adding 0.87 percent to end at 464,000 won to continue a seven-day winning streak, while Celltrion was down 1.45 percent at 272,000 won.

The South Korean currency closed at 1,128.9 won against the U.S. dollar, down 11.7 won from the previous trading session. 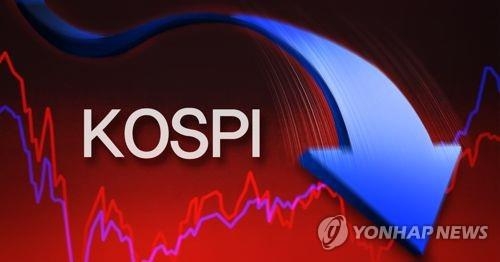