BEIJING, Aug. 10 (Yonhap) -- The Chinese government said Friday that its military will hold an "important" drill in the sea between China and the Korean Peninsula until Monday.

China's Maritime Safety Administration said that an important military activity will be conducted in five locations in the sea east of Qingdao, a port on the east coast of Shandong Province, from 6 p.m. Friday to 6 p.m. Monday (local time). 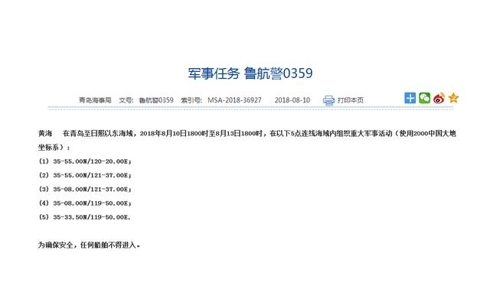 There is widespread speculation that China may mobilize its first domestically developed aircraft carrier in the maritime drill, as Qingdao is its home port.

The latest maritime drill in the Yellow Sea comes amid an intensifying trade dispute between China and the United States and drawn-out denuclearization negotiations between North Korea and the U.S.