Song, 20, will be battling Jo Hyeon-woo, who reached international stardom at the World Cup, for the top job in Indonesia. The men's football competition at the Asiad is open to those 23 or younger, but teams can field up to three players who are older. Jo, 26, is one of the three "wild card" members, along with Tottenham Hotspur star Son Heung-min and Gamba Osaka striker Hwang Ui-jo.

"We all know Jo did a great job at the World Cup," Song said of his competitor ahead of training at the National Football Center (NFC) in Paju, north of Seoul. "I just feel lucky that I can be on this team." 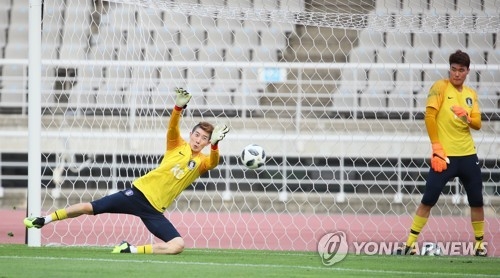 Jo was the surprise starter for South Korea at the World Cup and was named the Man of the Match in the team's shocking 2-0 victory over Germany in the group stage. Though South Korea didn't get past the group stage, Jo was one of the few bright spots for the team.

Song, who plays with defending K League 1 champions Jeonbuk Hyundai Motors, said he feels honored to play with Jo, who played in all three South Korean matches at the World Cup.

"There are so many things to learn from him," he said. "It's just an honor to compete with him and train with him."

Song and Jo are also roommates during their stay at the NFC. He said the Daegu goalkeeper is also giving him good words of advice ahead of the Asian Games.

Song, however, said he is not about to hand the starting job to Jo.

"Whether it's Jo or others, competition is inevitable," he said. "The coach will decide who will wear the gloves, and I think this kind of competition will help both of us to have a good game."

When asked about his edge over Jo, Song answered, "I'm younger."

The Taeguk Warriors are looking to defend their Asian Games title. They will play Bahrain, Malaysia and Kyrgyzstan in Group E.

The South Korean starting goalkeeper, no matter who is in net, likely won't be tested much in group play, but even if that happens, Song said he will not lose concentration.

"If you don't get to catch the ball for a long time, you might lose concentration, but that should not happen," he said. "I'm a player who works hard to accomplish his job. I'll do my best to earn my chances."