PAJU, Aug. 10 (Yonhap) -- South Korea's under-23 national football players said Friday they're working hard to master their roles in the back three system that the head coach wants to use during the Asian Games.

South Korea's U-23 football coach Kim Hak-bum has revealed that his side will use a 3-5-2 system as their main formation during the Jakarta-Palembang Asian Games in Indonesia. The players, who have been training at the National Football Center in Paju, north of Seoul, said they are focused on executing what Kim has ordered them to do on the pitch. 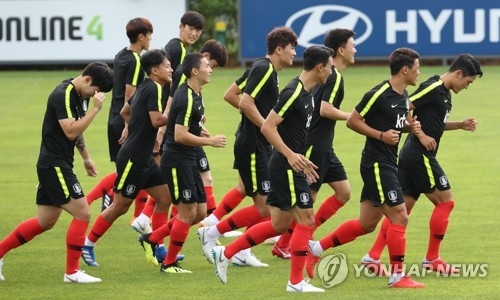 "Our head coach prefers playing attacking football," said Kim Moon-hwan, who plays as a right wing back. "He tells me to pay more attention in my crosses from the flank."

Kim Hak-bum has been emphasizing the roles of wing backs in his system, saying that they need to move forward and make runs to create chances from the wings.

"It's a back three that emphasizes attack, but that doesn't mean we're neglecting our defense," said the 23-year-old defender. "As for me, I have to do well when we transition from offense to defense."

As a wing back, the Busan IPark player said having strong stamina is the key.

"If you use this system, you have to be physically ready too," he said. "I know I have to execute the coach's orders and I have to sacrifice for the team."

Lee Seung-mo, who'll play as a defensive midfielder, said his duty is to cover space left behind wing backs when they go forward.

"I'm in a position that needs to think about defense," he said. "The coach tells me to make horizontal moves when wing backs make overlapping runs."

Lee, 20, is one of the players on the U-23 team who played in the FIFA U-20 World Cup last year. With some of his U-20 teammates on the Asian Games squad, such as forward Lee Seung-woo and goalkeeper Song Bum-keun, the Gwangju FC midfielder said he is expecting good teamwork.

"We know each other very well because we've been practicing together for a long time," he said. "But it's also time for us to make good plays with senior players. I hope we can show a performance that meets our nickname, the Asian Tigers."

The South Korean men's national football team will depart for Indonesia on Saturday. The Taeguk Warriors are looking to defend their Asian Games title. They will play Bahrain, Malaysia and Kyrgyzstan in Group E.

S. Korean footballers mastering their roles in back 3 system ahead of Asiad

S. Korean footballers mastering their roles in back 3 system ahead of Asiad