SEOUL, Aug. 10 (Yonhap) -- A China-based tourism agency said Friday it will stop all group travel packages to North Korea starting this week for around a month due to domestic affairs in the North.

China-based North Korea tour operator INDPRK said it received a notification from North Korean partners that they will stop all group package tours to the North starting Saturday and continuing until Sept. 5.

The agency said the decision came as all hotels in Pyongyang will undergo renovation for 20 days starting Saturday.

Pundits, however, said the announcement may have been made due to a potential visit to Pyongyang by Chinese President Xi Jinping over the period.

North Korea has in the past restricted entry of foreigners citing different reasons when the country prepared for significant events.

Pyongyang may also be preparing for the celebration of the 70th anniversary of its foundation on Sept. 9, they added.

"It is believed that North Korea is preparing for an important event, or high-ranking officials are planning a visit, considering that Pyongyang is restricting entry of foreigners over the peak tourism season, even though it one of its main sources of profit," a source in Beijing said.

The two leaders met three times since March in China, raising the possibility that Xi could make a reciprocal visit to the North in the second half of 2018.

"It is hard to understand why North Korea would suspend its tourism business just to renovate hotels, when the industry has been raking in money," another source said. 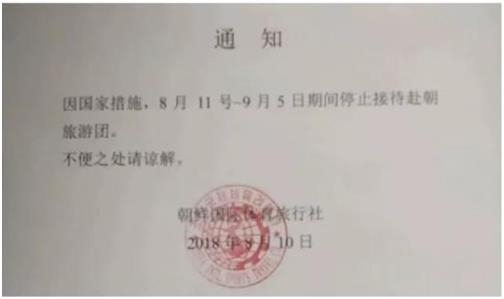