SEOUL, Aug. 11 (Yonhap) -- South and North Korea have confirmed a list of delegates for high-level talks next week which have been scheduled to discuss preparations for a new meeting between their leaders and review implementation of their previous summit agreements, the unification ministry said Saturday.

Unification Minister Cho Myoung-gyon will lead the South Korean delegation with Ri Son-gwon, chairman of the Committee for the Peaceful Reunification of the Country, as his counterpart for the meeting slated for Monday on the northern side of the truce village of Panmunjom, which separates the two Koreas, according to the Ministry of Unification.

Monday's talks will be the fourth of their kind since the start of this year. The two sides last met in June.

South Korean President Moon Jae-in and North Korean leader Kim Jong-un adopted a joint declaration when they met in April, in which they promised to work toward complete denuclearization of the Korean Peninsula, halt hostile acts against each other and bolster cross-border exchanges. The two also promised to meet in Pyongyang this fall.

The upcoming high-level meeting takes place amid mounting pressure on South Korea to play a role in reaching a breakthrough in the apparent stalemate in talks on North Korea's nuclear weapons program. 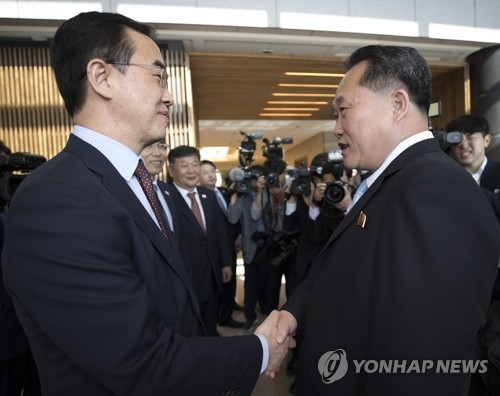