Led by head coach Kim Hak-bum, 19 footballers took a flight from Incheon to Jakarta to compete at the 18th Asian Games. Tottenham Hotspur star Son Heung-min was the only player who didn't travel with the team at Incheon International Airport. He'll join the team on Monday after playing in Tottenham's Premier League opener against Newcastle United later Saturday.

"We know we have to produce good results," Kim said to reporters at the airport. "We've prepared hard for this competition, and we'll win the gold medal."

South Korea are paired with Bahrain, Malaysia and Kyrgyzstan in Group E. They'll open the Asian Games campaign against Bahrain on Wednesday, and will next face Malaysia on Friday and Kyrgyzstan on Aug. 20.

Kim said he is concerned that they are entering the tournament without playing a single tuneup match but vowed that South Korea will prevail against their opponents.

When asked about his plan for Son, Kim said other players need to step up for the 26-year-old forward.

"Our opponents know Son, so he'll face tight marking from the defenders," he said. "If that happens, other players need to make a breakthrough in our attack."

Kim said his team is ready for any tough challenges from the opponents.

"Opposing players will be rough and physical against us," he said. "We'll increase our tempo and go forward. We're ready."

South Korea are the defending champions, and with a star-studded squad, winning the gold medal could put pressure on some players. Kim said his players need to overcome mental challenges as well.

"I told them to face the pressure," he said. "It's something that you can't avoid, so it's better to overcome it."

Kim said his team is about 70 percent complete but will reach 100 percent when they play in the final. 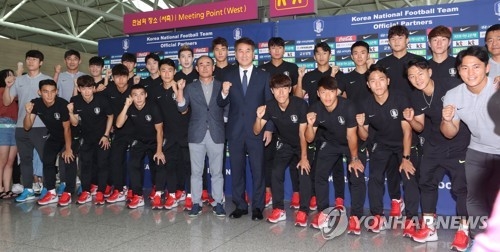