SEOUL, Aug. 12 (Yonhap) -- Typhoon Leepi, the 15th one of the year and formed 810 kilometers north of Guam around 3 a.m. on Sunday, is expected to keep moving northwest and is unlikely to affect the Korean Peninsula, the national weather agency said Sunday.

With a pressure of 998 hectopascals, it is a small typhoon and expected to become a tropical low pressure system when it reaches some 740 kilometers off the southeast coast of Japan's Kagoshima Prefecture around 3 a.m. on Tuesday.

Meanwhile, the 14th tropical storm of the year named Yagi advanced some 240 kilometers southwest of Japan's Okinawa Island early Sunday morning and is expected to move upward to Shanghai.

South Korea has been suffering from record high temperatures over the last few weeks and is in much need of rainfall that will cool it down. 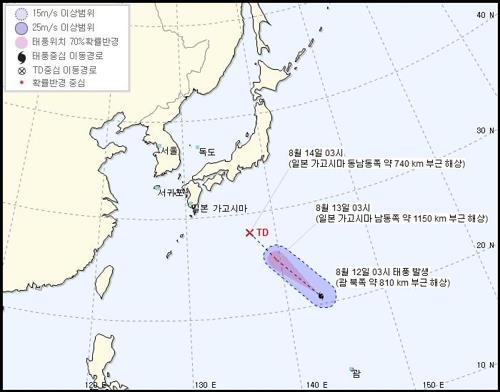