SEOUL, Aug. 12 (Yonhap) -- North Korean media on Sunday pointed a finger at Seoul for what it claimed was a lack of progress on the realization of the Panmunjom Declaration reached by the two leaders in April.

The declaration was adopted on April 27 during a historic summit between South Korean President Moon Jae-in and North Korean leader Kim Jong-un. The two sides agreed to work toward lasting peace and economic cooperation.

Uriminzokkiri, a North Korean external propaganda website, argued that South Korea should work harder to improve inter-Korean relations in light of the spirit of the Panmunjom Declaration, arguing that Seoul's "blind obedience" to the U.S.-led sanctions was a big hurdle to fulfilling the declaration.

"It's been more than 100 days since the April 27 Panmunjom Declaration was adopted, but no fruit or progress has been produced. It is because of America's sanctions and the South's unfair participation in them," it argued. 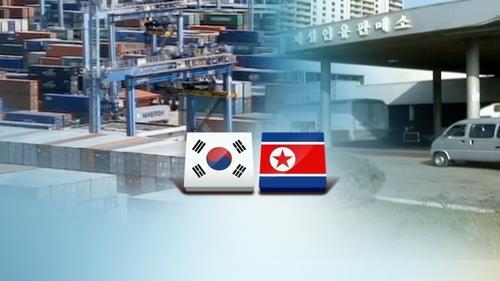 The blame came a day ahead of a scheduled high-level official meeting Monday to discuss another summit in the near future and review the implementation of their previous summit agreements.

At the upcoming talks, North Korean officials are likely to press Seoul officials to speed up economic projects, which are expected to ease the economic strain on the cash-strapped regime in the North.

The website complained that Seoul only "focused on projects such as a joint review, investigation or research, that were not directly linked to economic gains" and was "hesitant about the actual implementation, citing conditions not being met."

"The Panmunjom Declaration can't be implemented with one-sided efforts," it argued. "Now is not a time for political gains or saving face but is when each should work sincerely towards improving inter-Korean relations."