SEOUL, Aug. 12 (Yonhap) -- South Korea's domestic gold prices fell to the lowest level in 20 months despite mounting concerns over the trade dispute between the United States and China, the local exchange said Sunday.

The KRX said that the drop in prices is mainly due to the appreciation of the U.S. dollar that is causing investors to view the precious metal as a less attractive option.

The U.S. Dollar Index (DXY), which measures the value of the greenback with a basket of six foreign currencies, recently reached an annual high of 95.18.

In the Korean won-dollar exchange, the U.S. currency appreciated some 5-6 percent this year, reaching an average exchange rate of 1,120 won to the dollar in July vis-a-vis just 1,063.50 at the start of the year.

"Usually, uncertainties cause people to buy up gold, but this is not the case this year," said Korea Investment and Securities Co. analyst Seo Tae-jong. "The ongoing dispute between Washington and Beijing actually seems to be causing the strengthening of the dollar compared to gold."

The expert added, along with other market watchers, that investors were all aware of the U.S. Federal Reserve's move to raise interest rates in 2018, so there was no real merit in buying gold, when the value of the greenback would rise.

Seo said at present, gold prices may only go up if the value of the dollar falls off.

"Such a development is not likely at present with the world's most powerful means of settling accounts expected to move in a very tight range," he pointed out. 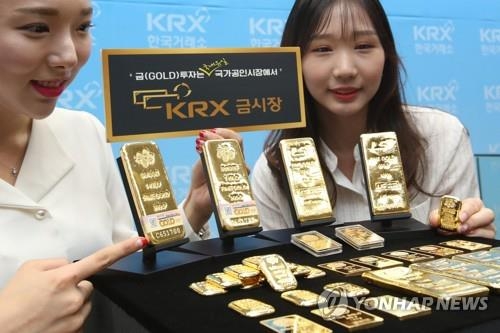