SEOUL, Aug. 12 (Yonhap) -- The South Korean government has elicited some negative responses for what seemed to be an attempt to shift the responsibility to underage football players for possible security accidents while they are in North Korea for an international tournament.

On Friday, South Korean youth football teams traveled to North Korea by land for an international under-15 tournament in Pyongyang. The tournament, jointly organized by Seoul's South-North Korea Inter-Korean Sports Association and Pyongyang's April 25 Sports Club, will run from next Monday to Aug. 18.

Before they traveled to the North, the unification ministry had them sign on a piece of paper that specified a number of security issues that the young players need to know.

While generally customary, the paper's last point became controversial as it said, "Each individual should be mindful of their own safety while in the North and shoulder responsibility for any security accident and problems arising from violating local laws." 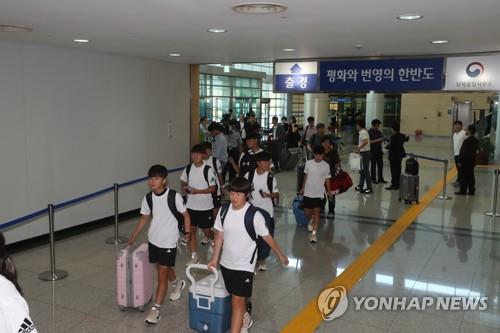 Critics argued that the government failed to consider the specific circumstances in the North where it ought to intervene in solving any problems even if it is the fault of an individual.

Another issue that raised some eyebrows is that the participants should consult the government before revealing to media what they learn or gather in the North. As the delegation of 168 includes a number of journalists, the point appears to be an attempt by the government to control press reports.

The unification ministry said the paper is aimed at reminding the participants of the importance of staying vigilant while in the North and not to pass security responsibilities to individuals.

Not every participant was asked to sign the paper and only a few representatives did, the ministry pointed out. 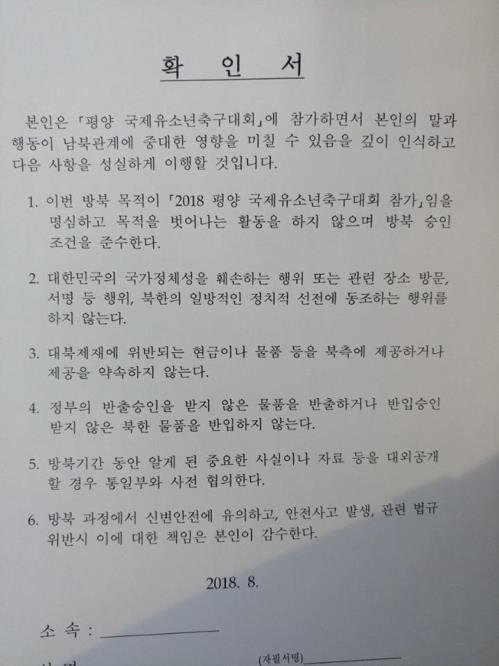