SEOUL, Aug. 12 (Yonhap) -- Loans offered by South Korea's secondary banks increased by slightly less than 43.2 trillion won (US$38.2 billion) in the first half of 2018, the highest tally on record for the period of any year, official data showed Sunday.

The increase counts loans extended to both households and businesses, with outstanding credit provided by the lenders standing at 832.3 trillion won, the findings by the Bank of Korea (BOK) showed.

The BOK said the rate of increase for second-tier loans was the highest January-June figure recorded since it started keeping tabs on such data in 1993.

The central bank said on an annual basis, the increase could exceed the all-time high of 87.7 trillion won confirmed at the end of the year in 2016. In 2017, the amount provided stood at 64.5 trillion won.

It said that the main reason for the rise in loans is due to more funds being offered to local businesses.

"Small business owners who no longer can borrow money via personal unsecured loans from regular commercial banks have turned more and more to secondary options that is causing overall numbers to rise," said Cho Young-moo, a senior economist at the LG Economic Research Institute.

"This seems to be the response to the government taking steps to rein in household loans from first-tier banks," the expert claimed.

He and others said that since those using secondary banks generally have a lower credit rating, any hike in local interest rates or a slowdown in the local economy could make it harder to pay back debt, which could compromise the country's financial sector as a whole.

Reflecting the need for control, Seoul said it will tighten borrowing requirements starting in the second half that could make it harder for people and firms to secure money. 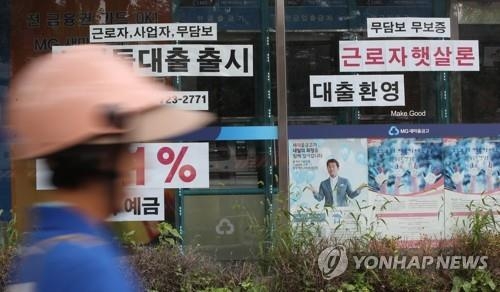