The alarm comes as the organization representing developed market economies with high income adjusted down Seoul's composite leading indicator (CLI), backtracking 0.3 point to 99.2 in June from the previous month.

The CLI is designed to provide early estimates six to nine months down the line on fluctuations in a nation's business cycles linked to economic activity. The Paris-based organization is basing its assessment on numbers provided by the Bank of Korea, Statistics Korea, various economic indicators and movements of the bourse.

A reading below 100 means that things are heading downhill, with the country's numbers causing worries as it has been heading south for 15 months in a row after peaking at 100.98 in March 2017.

CLI numbers for Asia's fourth-largest economy previously declined for 20 months straight from September 1999 through April 2001 as it struggled with the fallouts of the Asian crisis.

In addition to weakening numbers, the pace of decline that stood at 0.1 point up till February accelerated to 0.2 point in March.

The OECD's declining numbers are not restricted to South Koreas with the average for its members hovering below 100 in the April through June period, but CLI numbers for other countries have only recently started to give ground with the pace of decline being smaller vis-a-vis that for South Korea.

Reflecting this, an assessment of recent economic indicators by the government here showed the coincident and leading economic composite indices all losing ground, which can be considered to be a sign of trouble.

Statistic Korea's coincident composite index was off 0.2 point recently, the first dip in six months, while the leading number declined in February and March, as well as in June, after staying pat in May.

Related to such warning signs, the government said it is too early to say if certain indicators mean the economy is actually losing steam. It said the present is not the time to officially announce an economic slowdown.

"It is true that if the leading index falls for six straight months it is a sign of a downturn, yet in May of this year, numbers stayed unchanged, making it hard to come to any conclusion," a government official said. He, moreover, pointed out that there is a need to look at various other factors beyond indices to determine for certain the direction of the overall economy. 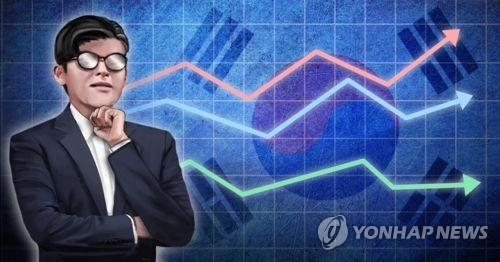