SEOUL, Aug. 12 (Yonhap) -- The South Korean government will take punitive measures as early as this week against four South Korean ships confirmed to have imported North Korean coal to the country, the foreign ministry said Sunday.

While meeting with local reporters, an official from the ministry, who is familiar with the matter, said: "The process (on the matter) is being handled now. I think (banning port entry) will go into effect sometime this week."

The four ships -- the Sky Angel, the Rich Glory, the Shining Rich and the Jin Long -- will be forbidden from entering South Korean ports. They were confirmed to have brought North Korean coal and other mineral resources to South Korea last year in violation of United Nations sanctions.

On Friday, the Korea Customs Service said that three South Korean firms imported North Korean coal and pig iron from Russia on seven occasions between April and October last year by forging customs documents in apparent violation of a U.N. sanctions resolution. It asked prosecutors to indict the companies for illegally importing the mineral resources worth 6.6 billion won (US$5.8 million).

The government, the official said, will report the detailed investigation results to the U.N. Security Council possibly within the week, adding that the United States has already been briefed on the matter. 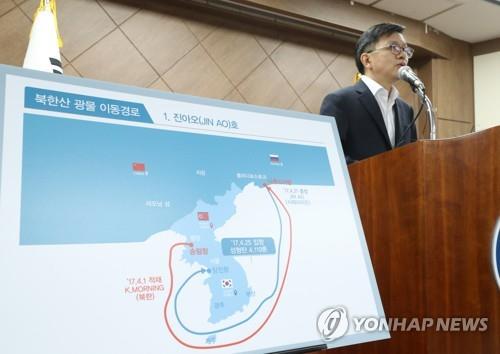