Corporate data showed that while diesels, made mostly by German carmakers, accounted for 68.8 percent of all imports in 2015, up from 22.4 percent in 2009, that figure had come down to 46.3 percent as of July of this year, compared with 44.9 percent for cars that run on gasoline.

"In particular, unlike VW's 2015 dieselgate that had broader environmental implications that did not really impact ordinary people, the latest fires are safety related and can cause local consumers to switch to gasoline or Japanese brands that have extensively built their eco-friendly vehicle lineup with numerous hybrid and pure-electric models," he said.

In 2018, 36 BMW cars caught fire with eight occurring so far in August alone.

The move away from diesel in South Korea is not a new phenomenon, since Europe, which was dominated by diesel cars, has steadily moved away from the fuel source.

Data by the European Automobile Manufacturer's Association showed the proportion of diesel cars dropping to 45.7 percent of all cars sold on the continent, down from 56.1 percent in 2011. The numbers showed that in the first quarter of 2018, gasoline cars made up 55.5 percent of the market with diesel trailing at 37.9 percent.

In the country's import market, so-called green vehicles accounted for 9.9 percent of the total in 2017, with numbers continuing to rise. This is in contrast to less than 5 percent before 2015.

Reflecting this, all carmakers are moving away from diesels and shifting to HEVs, PHEVS and EV.

Hyundai Motor Co., South Korea's No. 1 carmaker, recently said it will stop production of four diesel models and have some 38 green vehicles by 2025, with Japanese companies, like Toyota, pledging to release some 10 pure battery EVs in the early 2020s.

"The BMW fires may lead to a change in social perception in regard to diesels that could lead to the redrawing of the import car market going forward," an automotive industry expert here said. 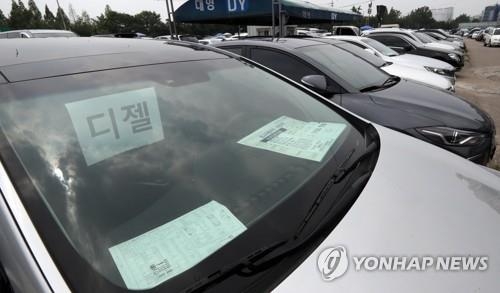