SEOUL, Aug. 12 (Yonhap) -- The owner of a BMW vehicle that caught fire will be summoned by police on Monday to give formal testimony as South Korean law enforcement try to determine if the German luxury brand tried to hide a serious safety defect, sources said Sunday.

The Seoul Metropolitan Police Agency said it has asked a plaintiff that had filed charges against BMW to give testimony and to submit any other documents the person possess that are related to the fire.

"The person being summoned can represent others that have taken joint action against the carmaker," an officer said. He added that law enforcement authorities will work closely with the Ministry of Land, Infrastructure and Transport and other related agencies to get to the bottom of the matter.

Last week, BMW claimed that the exhaust gas recirculation (EGR) in its diesel cars was the root cause of the fire incidents. The German carmaker said it will voluntarily recall more than 100,000 passenger cars to fix the faulty EGR part, although such measures are seen here as being too little, too late.

Also, lawmakers from the Land, Infrastructure & Transport Committee at the National Assembly will hold a meeting on Monday with BMW Korea Chairman Kim Hyo-joon and other executives to discuss measures to handle the fire incidents. 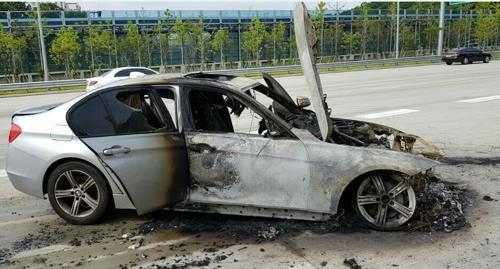