With the Dodgers in Denver to face the Colorado Rockies on Sunday (local time), LA manager Dave Roberts said the South Korean lefty will come off the disabled list (DL) to start against the San Francisco Giants on Wednesday at Dodger Stadium.

Ryu suffered a left groin strain during a start against the Arizona Diamondbacks on May 2, his sixth start of the season. He made two minor league rehab starts earlier this month, first at Advanced A and then at Triple-A, pitching nine innings in total and allowing only one run on seven hits.

Ryu had been one of the Dodgers' best starters before that injury. And he tossed 1 1/3 scoreless innings before he got hurt, lowering his ERA to 2.12 while maintaining a 3-0 record. 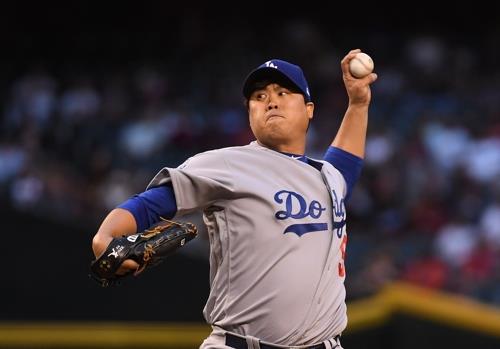 The 31-year-old joins the rotation of Clayton Kershaw, Rich Hill, Walker Buehler and Alex Wood, who himself will come off the DL to start Tuesday. That gives the Dodgers four southpaws in the rotation, with Buehler being the lone exception.

And Ryu's and Wood's activation prompted Roberts to move two right-handed starters, Kenta Maeda and Ross Stripling, to the bullpen.

Both Maeda and Stripling have experience pitching out of the bullpen. Ryu, on the other hand, has been a starter his whole career -- save for one relief appearance in 2017 -- and following a shoulder surgery that cost him the entire 2015 season, Ryu now needs a lengthy pregame routine that precludes a move to the pen.

This was seen as one of the reasons that Ryu was left off the Dodgers' postseason roster as they reached the World Series, while Maeda made a seamless transition from the rotation to the pen.

This is the final year of his six-year, US$36 million contract.

Dodgers' Ryu Hyun-jin set to return to rotation this week

Dodgers' Ryu Hyun-jin set to return to rotation this week