SEOUL, Aug. 13 (Yonhap) -- South Korea has set out to capture 65 gold medals at the 2018 Asian Games starting this weekend in Indonesia, believing it would take at least that many to finish in second place in the medal race for the sixth consecutive competition.

And the nation will turn its expectant eyes to three sports that should be the biggest gold mines: fencing, archery and taekwondo.

South Korea has enjoyed unprecedented international success in fencing of late. At the world championships last month, South Korea finished second overall behind Italy with two gold, two silver and three bronze medals -- its largest total ever at the competition. South Korea was the only nation to reach at least the semifinals in all six team events -- men's and women's sabre, epee and foil. 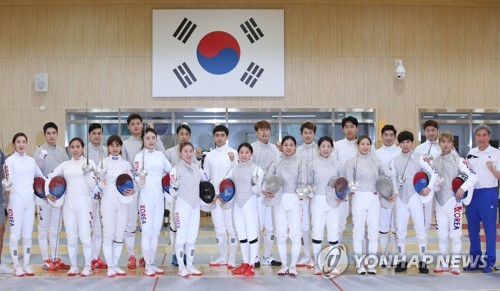 South Korea won eight out of 12 fencing gold medals at the 2014 Asian Games in Incheon, and head coach Yang Dal-sik said last week that he believes the current group of fencers should be able to match that gold medal tally.

Gu defeated Kim Jung-hwan for the individual sabre gold four years ago and will try to win his third straight Asiad title. On the women's side, the 36-year-old foil veteran Nam Hyun-hee will try to become the most decorated South Korean athlete in the summer Asian Games. Over her four previous Asian Games, Nam has won six gold medals, tied with swimmer Park Tae-hwan. And with Park skipping this year's Asian Games, Nam has a chance to break a tie in the women's foil team event.

Where South Korea's dominance in fencing is a relatively recent development, the country has reigned supreme in archery for decades. The trend likely won't change at these Asian Games, where South Korea will chase a complete sweep of eight gold medals. 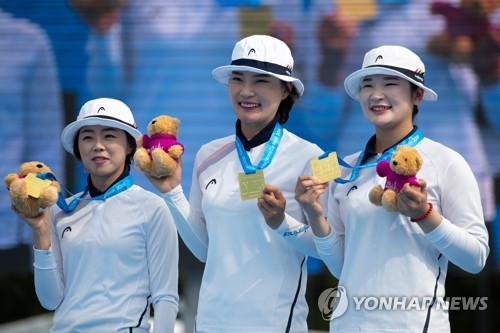 In addition to the conventional men's and women's individual and team recurve events, a mixed team event in recurve has been added. The compound discipline, which was added to the Asian Games in 2014, will offer three gold medals in men's, women's and mixed team events.

Oh Jin-hyek, the reigning men's recurve individual champion, is back on the national team -- notoriously tough to make given the depth of archery talent pool in South Korea -- along with other veterans Im Dong-hyun and Kim Woo-jin.

Leading the women's team will be the 2016 Olympic double gold medalist Chang Hye-jin. Before her Olympic breakthrough in Rio de Janeiro, the 31-year-old also won team gold and individual silver at the 2014 Asian Game. She will have a shot at three gold medals this time.

In recurve, South Korea has had four gold medal sweeps at Asian Games. In compound -- where archers use magnified sights and bows are more forgiving -- South Korea picked up two gold medals from the women's competition in 2014, with India and Iran giving South Korea a run for its money. A clean sweep of three titles isn't out of question this year.

There are fewer weight classes in taekwondo this year than four years ago. South Korea won six out of 16 gold medals then to lead all nations, but there are 10 weight classes this year in "kyorugi," or sparring events. But "poomsae," a demonstrative form of taekwondo, has been added to the taekwondo competition, with four gold medals up for grabs.

Lee Dae-hoon, South Korea's most recognizable taekwondo star, will seek his third straight gold medal in the men's under-68 kilograms. Kim Tae-hun, another accomplished practitioner with one Asian Games gold and three world titles to his credit, is also a gold medal favorite this year in under-58kg. On the women's side, Lee Ah-reum and Lee Da-bin will also be chasing their second consecutive titles, in under-57kg and over-67kg, respectively.

All told, fencing, archery and taekwondo could produce around 25 gold medals for South Korea, more than one-third of its target. 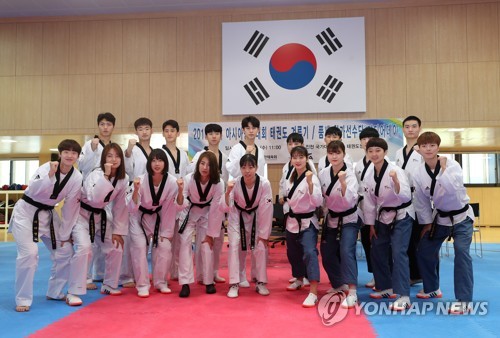