SEOUL, Aug. 13 (Yonhap) -- The government plans to treat the state pension and the basic pension separately so that recipients of both will not have their payments cut when the sum of the benefits exceeds a certain level, welfare authorities said Monday.

People who receive the national pension that is more than 150 percent of their basic pension amount normally have the latter's sum reduced. For instance, recipients that are entitled to 250,000 won (US$221.33) a month in basic pension will receive less if their monthly national pension exceeds 375,000 won. About 250,000 people fall into this category, according to the authorities.

Sources at the Ministry of Health and Welfare, the National Pension Service and the parliamentary committee on welfare said such regulations could be scrapped when the government announces key changes to the national pension system at a public hearing Friday.

The consensus is that the current system of calculating the pension amount is too complex, and the coupling of the two different pensions discourages people from subscribing to the national pension, the sources said.

The national pension review committee, which will be charting the system changes, also suggests that the sum of the basic pension be calculated according to median income rather than the inflation rate as it is done now.

Tying the pension's raise to inflation lowers the payout in the long term, the sources said.

The review committee recommends a public discussion on whether and by how much the basic pension needs to be increased to improve the income replacement ratio, according to the sources.

The basic pension, revised and expanded in July 2014, pays benefits to people aged 65 and over whose income falls in the bottom 70 percent. 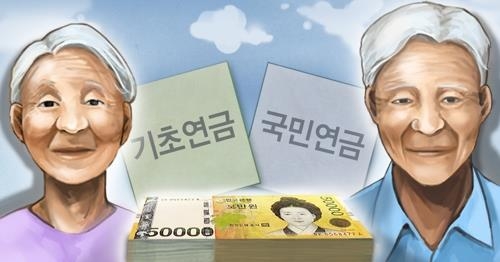