The Incheon Port Authority (IPA) said that it will push for foreign cruise ships to call at both South and North Korean ports ahead of the opening of the nation's largest cruise ship terminal in Incheon, about 50 km west of Seoul, in April next year.

Under the project, the IPA will enable foreign tourists to visit South and North Korea at the same time by leading foreign cruise ships at Incheon to make additional calls at the North's ports like Nampho and Haeju. 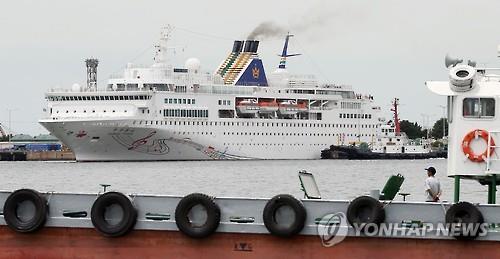 In January 2016, a Chinese cruise operator based in Shandong Province unsuccessfully pushed to launch a new cruise travel service linking China's Qingdao, Nampho and Incheon due to disapproval from the South Korean government.

From 2002 to 2011, the two Koreas ran a regular cargo ship service in the Yellow Sea between Incheon and Nampho.

Incheon's new cruise ship terminal capable of handling 5,000 to 6,000 tourists at the same time is expected to bring considerable changes to the nation's marine tourism market.

Meanwhile, the IPA said it has also decided to push to modernize the port of Nampho and import North Korean sand collected near Haeju as part of inter-Korean economic exchanges.

To that end, the corporation plans to conduct a joint inter-Korean study on the North's port infrastructures and sea routes.

"In the past, the Incheon-Nampho route accounted for 60 percent of inter-Korean trade. Incheon and Nampho have a similarity as the gateway to each other's capital," an IPA executive said.