Last week, the two largest parties agreed to manage the funds more transparently and disclose the receipts, but faced fierce criticism that those measures fall short of public demands for reform.

"The ruling and opposition parties agreed to completely abolish the funds," Hong Young-pyo, the floor leader of the DP, said at the start of a meeting with speaker Moon Hee-sang and party floor leaders.

Criticism sharply rose after a local civic group disclosed data in July showing that the National Assembly provided ranking lawmakers, including party floor leaders, with up to 60 million won (US$53,641) every month in the name of special activity funds.

Critics said that the funds have been spent without any oversight as no receipts are required to prove they were properly used, calling for scrapping them as it is a waste of taxpayers' money. The funds are called a second salary for lawmakers.

This year, the budget on special activity funds is known to be set at some 6 billion won, down about 1.9 billion from the previous year.

Minor opposition parties -- the Bareumirae Party (BP), the Party for Democracy and the Justice Party -- earlier said that they will stop the practice of taking the special funds.

"We hope that parties' decision to scrap the funds could pave the way for other institutions that usually use such money -- the spy agency, the presidential office and the prosecution -- to improve relevant systems," said Kim Kwan-young, the BP's floor leader.

Speaker Moon hailed the parties' announcement as a bold decision that will go down in Korea's political history.

The National Assembly will reveal how to improve the system over the special funds to the public Thursday when an extraordinary session for August will open.

The parliament came under fire when it recently appealed a court order for the legislative body to disclose details about the special funds for lawmakers and their foreign trip expenses spent in the second half of 2016. 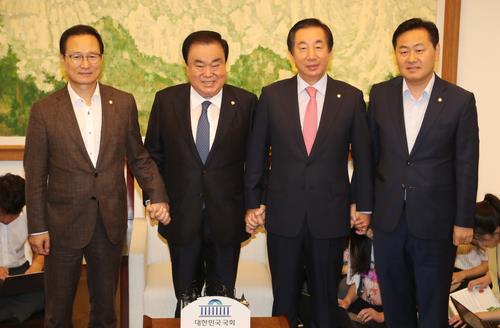