SEOUL, Aug. 13 (Yonhap) -- South Korea will embark on their title defense campaign in men's football at the Asian Games this week.

The under-23 national football team, led by head coach Kim Hak-bum, landed in Indonesia on Saturday to compete at the Jakarta-Palembang Asian Games.

South Korea are grouped with Bahrain, Malaysia and Kyrgyzstan in Group E for the men's football competition. South Korea's first game will be against Bahrain at Jalak Harupat Stadium in Bandung, some 160 kilometers south of Jakarta, on Wednesday.

Kim's side will then face Malaysia on Friday and take on Kyrgyzstan next Monday.

South Korea hope to cement their reputation at the Asian Games with a gold medal victory. The Taeguk Warriors claimed four Asian Games gold medals, tying with Iran for the most wins in the men's football tournament. 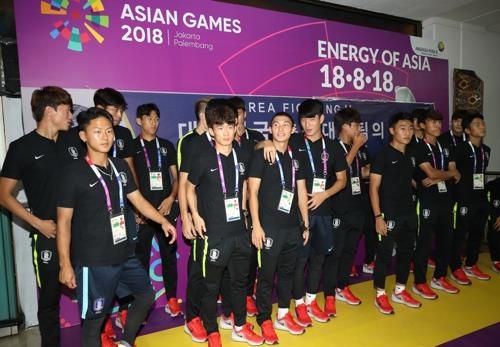 South Korea put together a star-studded squad for this year's Asian Games that includes the players who competed at the 2018 FIFA World Cup in Russia.

Son and Jo are "wild card" members along with Gamba Osaka target man Hwang Ui-jo. The men's football competition at the Asian Games is open to those who are aged 23 or under, but teams can field up to three players who are over the age limit.

South Korean footballers have extra motivation to win an Asian Games gold medal, as such a victory would grant them an exemption from mandatory military service, meaning that if they win the gold, the players can continue their pro careers without interruption.

South Korea's boss Kim said his team will mainly use a back three system. Kim first mentioned using a 3-5-2 setting, but later hinted at deploying a 3-4-3 formation, focusing more on wing plays.

South Korea have versatile attackers who can play on the flanks and at center. Son, Lee and Hwang Hee-chan can switch their positions on the pitch and confuse opposing players. 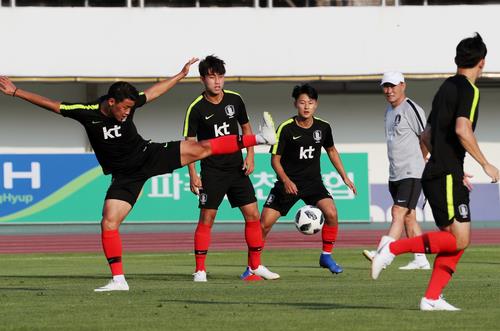 South Korea's three-man defense will be led by Kim Min-jae, a 21-year-old who has seven caps with the senior national team. The Jeonbuk Hyundai Motors defender was a starting center back for South Korea, but was dropped from the World Cup squad due to injury.

Wearing the gloves will be Jo, who earned international recognition through his stellar performance at the 2018 World Cup. Jo started South Korea's all three group stage matches, including a 2-0 win over Germany, and allowing three goals, two of them on penalty kicks.

Against their opening match opponents, Bahrain, South Korea have yet to suffer a loss on the U-23 level. The national team posted six wins and one draw against Bahrain's U-23 side, with their last meeting having taken place in 2007.