The meeting, to be held Thursday over lunch, comes amid Moon's call for bipartisan efforts to improve the people's livelihoods and revitalize the local economy.

The meeting may involve the floor leaders of the ruling Democratic Party, the main opposition Liberty Korea Party and three minor parties -- the Bareunmirae Party, the Party for Democracy and Peace and the Justice Party -- according to Han Byung-do, the senior secretary to the president for political affairs.

While stressing the need for what he calls "joint governance," the president is also expected to offer at least a couple of ministerial posts to lawmakers from left-leaning minor opposition parties.

Cheong Wa Dae officials have said the president may reshuffle the cabinet soon after his return from his summer vacation, which ended Aug. 3. 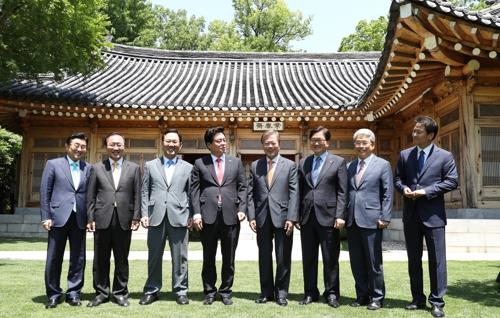 "The upcoming meeting is aimed at strengthening joint governance with the National Assembly that the president has continuously stressed," Han told a press briefing.

"They will likely discuss ways to cooperate on pending issues and legislations related to the people's livelihoods ahead of the extraordinary parliamentary session in August and the regular session in September," he said. "They are also expected to discuss bipartisan efforts to establish peace on the Korean Peninsula."

Thursday's meeting, if held, will mark the second of its kind since Moon took office in May 2017. The president has also held separate meetings with chiefs of the five major political parties.